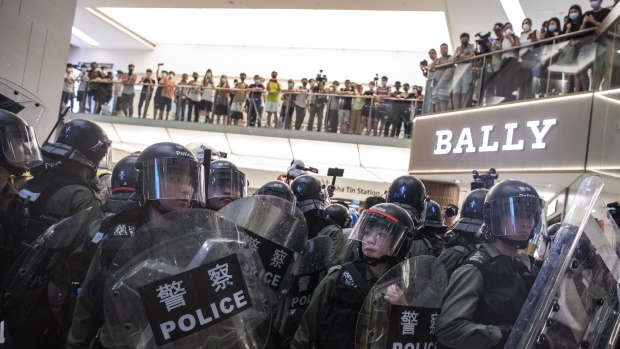 Police stand off against demonstrators inside New Town Plaza shopping mall during a protest in Hong Kong on July 14. , Photographer: Justin Chin/Bloomberg

(Bloomberg) -- Most Hong Kong retailers have seen sales drop more than 50% in August, according to the city’s Retail Management Association, as the ongoing political protests take a toll on business and the economy.

The association has urged landlords in the city to halve rents for six months to help tenants overcome difficult times, and has called on the government to provide relief measures to retailers, according to a press release. Retailers are facing large cash flow pressures and a few of them will cut jobs or even shut down if the situation continues to worsen, it said.

The release didn’t explain what period it was comparing August’s sales with.

Hong Kong’s government expects the city’s businesses to continue to suffer this year. The value of retail sales dropped 6.7% in June from a year earlier, the fifth straight month of declines, while the overall economy contracted in the three months through June from the first quarter. Embattled Chief Executive Carrie Lam said earlier this month that she saw “no room for optimism” for the economy this year.

Hong Kong’s trade-dependent economy was facing a full-year deceleration even before protests over the government’s extradition bill began disrupting business and tourism in June. The unrest continued into July and August, and the effects are likely to continue without a resolution of the political strife.

To contact the reporter on this story: Cathy Chan in Hong Kong at kchan14@bloomberg.net

To contact the editors responsible for this story: Sam Mamudi at smamudi@bloomberg.net, James Mayger