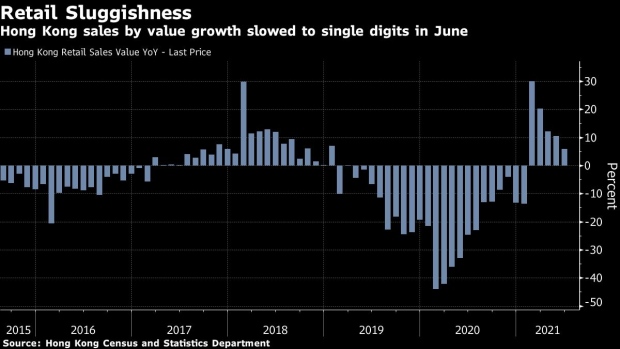 Pedestrians wearing protective masks walk along a street in the Central district of Hong Kong, China, on Wednesday, Sept. 23, 2020. Hong Kong's economy has been rocked by anti-government protests in 2019 and the pandemic this year. Photographer: Billy H.C. Kwok/Bloomberg , Bloomberg

(Bloomberg) -- Hong Kong’s retailers saw a sharp downturn in June as the city’s borders remain closed to tourists, with businesses looking ahead to the distribution of consumption vouchers for a boost in coming months.

Retail sales by value grew 5.8% in June from a year ago to HK$28.1 billion ($3.6 billion), a government report showed Monday, well short of the 14.1% median estimate in a Bloomberg survey of economists. It’s the first time growth has slowed to single digits since sales began expanding again in February following a two-year contraction.

Sales by volume rose 2.8% in June, also substantially lower than the median estimate of 10.5%.

“With incoming visitors remaining scant, retail sales stayed far below the pre-recession level,” the government said in a release. “The consumption voucher scheme will help stimulate local consumer sentiment and provide support to the retail sector.”

The city began distributing the HK$5,000 electronic vouchers to permanent residents and eligible immigrants aged 18 and older on the weekend.

Hong Kong’s Economy Is Finally Recovering, But Only for the Rich

Consumption remains a key laggard as the economy slowly emerges from a historic two-year recession driven by political unrest and the pandemic. While the city’s financial services industry has proven resilient, the ongoing virus restrictions mean tourism and other retail services remain under pressure.