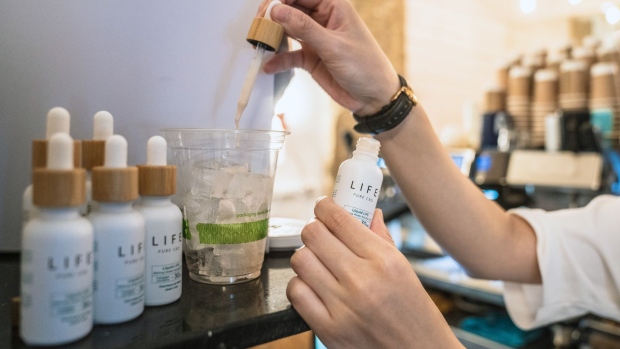 The Found CBD cafe in Hong Kong, China, on Thursday, Aug. 11, 2022. As Hong Kong takes its first steps toward cracking down on cannabidiol, businesses specializing in CBD-infused beers, coffees and other products are scrambling to work out what comes next. , Bloomberg

(Bloomberg) -- As Hong Kong takes its first steps toward cracking down on cannabidiol, businesses specializing in CBD-infused beers, coffees and other products are scrambling to work out what comes next.

An unregulated market in goods containing the cannabis-derived compound has flourished since the city’s first CBD cafe, Found, opened in July 2020. The Asian financial hub now has dozens of cafes and shops selling CBD, but a government proposal to ban the substance before the end of the year puts those enterprises in jeopardy.

“With a full ban for CBD in Hong Kong, we would be forced to probably shelve the Found brand as it exists today,” said Fiachra Mullen, chief marketing officer at Altum International Ltd., which owns Found and supplies CBD products to other businesses in the city.

While cannabidiol doesn’t have psychoactive properties, consumers claim the compound relieves anxiety, stress and pain. It’s become a multi-billion dollar global industry in recent years, with products ranging from snacks and gummies to oils and cosmetics. CBD is legal in the US and parts of Europe, as well some Asian countries including Thailand and Japan. However, it has been banned in mainland China since last year.

Hong Kong authorities point out that the compound can naturally decompose or be intentionally converted into tetrahydrocannabinol (THC) -- the substance that gives marijuana users a high, which is illegal in the city.

High temperatures or direct sunlight can cause CBD to degrade into THC, according to Dr. Albert KK Chung, clinical assistant professor at the University of Hong Kong’s department of psychiatry.

“If you have CBD being improperly stored, it could cause this kind of degradation,” he said, adding that ingesting THC can cause psychotropic or gastrointestinal side effects.

Mullen says Altum tests its products to ensure no THC is present. “We went up to four labs to test each of our products before they were shipped,” he said.

Tammy Tam, co-founder of CBD beer brand plantB, said her company only uses products that are certified THC-free and “go beyond the government compliance level.”

Many consumers use CBD in hopes of improving sleep, treating pain and bettering general wellbeing. One recent study found the substance reduced the severity of chronic anxiety in young people. But Chung said there is a lack of concrete evidence of its benefits, and that most places that have legalized CBD medication use them only for rare medical conditions, such as severe forms of epilepsy.

Dr. Calvin Ho, co-director at HKU’s Centre for Medical Ethics and Law, expects Hong Kong authorities to ban CBD for pragmatic reasons. “With health-related matters or concerns, the government is likely to be precautionary,” he said.

When the ban was discussed on June 7, authorities said they intended “to table the relevant legislation within 2022.” For CBD-focused businesses, that may spell the beginning of the end.

“This is our only sales revenue,” said plantB’s Tam. A ban would leave her “with no choice but to close the business.”