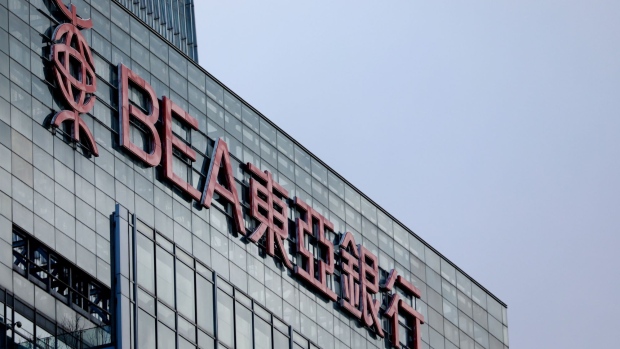 Signage for The Bank of East Asia (BEA) Ltd. is displayed atop of a building in the central business district of Beijing, China, on Thursday, March 14, 2019. China is planning to approve new rules for foreign investment in the country this week, a sweeping overhaul of regulations that will affect corporate titans from Ford to Alibaba and Tencent. Photographer: Giulia Marchi/Bloomberg , Bloomberg

(Bloomberg) -- Bank of East Asia Ltd. is considering a sale of its general insurance business Blue Cross (Asia-Pacific) Insurance Ltd. as it seeks to continue raising cash through the disposal of non-core assets, according to people familiar with the matter.

BEA, as the Hong Kong-based lender is known, is working with Goldman Sachs Group Inc. for the potential transaction, the people said, asking not to be identified because the information is private. A sale could raise $300 million to $400 million, the people said.

A formal process may kick off as soon as early next year, the people said, adding the unit could draw interest from bidders including global insurers.

No final decision has been made as the deliberations are preliminary, and BEA could still decide to keep the general insurance unit for longer, the people said. A representative for Goldman Sachs declined to comment.

A spokesperson for BEA said the bank evaluates strategic options for its assets including those which align with its broader strategy, and declined to comment further.

BEA, whose shareholders include activist investor Paul Singer’s Elliott Management Corp., has been shedding assets to focus on growth areas such as its China business. A review of its insurance division led to the HK$5.07 billion ($651 million) sale of BEA’s life insurance unit to AIA Group Ltd. earlier this year. The deal included an exclusive agreement for AIA to distribute its life insurance products to BEA’s customers.

In its interim results announced in August, the BEA said underwriting profit at its Blue Cross unit returned to normal in the first six months of this year, following an exceptional result last year when medical claim ratios dropped as customers avoided going to hospitals in the midst of the pandemic.