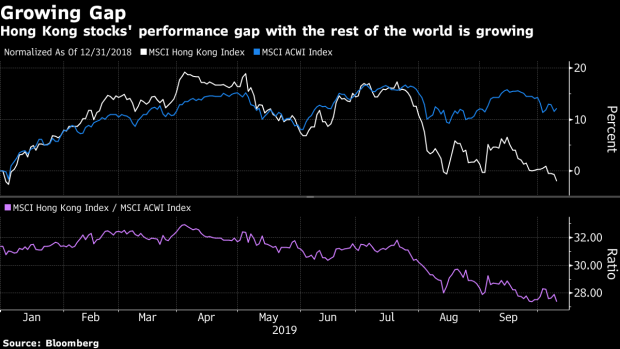 The nation’s stocks have appeal as valuations are suppressed and dividend payouts exceed the yields on government bonds by near the most on record, said Yves Bonzon, chief investment officer at Bank Julius Baer & Co. at a press roundtable in the city yesterday.

He added that the city’s currency board, which stabilizes its value against the U.S. dollar, would likely remain intact.

“Hong Kong equities are a buy,” he said. “You can see from the Hong Kong market valuation that the appetite for equities at the moment is very low, which creates a unique entry point.”

Julius Baer’s positive outlook contrasts with pessimism in other quarters. S&P Global Ratings warned Tuesday that residential property prices may fall by 10-20% from their recent peak by the end of 2020 as a result of the sustained civil unrest. Meanwhile, Morgan Stanley downgraded their recommendation on the city’s banking sector to underweight the same day.

But investors should load up on Hong Kong stocks with as broad an exposure as possible as they should rebound during the next three to eight years, said Bhaskar Laxminarayan, Julius Baer’s chief investment officer for Asia. “In the next decade, you can’t afford not to own these.”

To contact the editors responsible for this story: Christopher Anstey at canstey@bloomberg.net, Cormac Mullen, Ravil Shirodkar