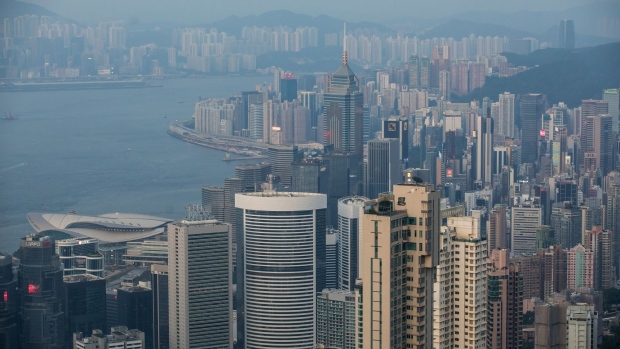 Buildings are seen from Victoria Peak in Hong Kong, China, on Wednesday, Aug. 28, 2019. Hong Kong's hotel industry is struggling with a collapse in bookings after thousands of protesters shut down flights from the territory's airport in an escalation of months of clashes with police. Photographer: Paul Yeung/Bloomberg , Bloomberg

The Exchange Fund, managed in its current form by the Hong Kong Monetary Authority since 1998, lost HK$111.5 billion on its portfolio of domestic and foreign stocks, while bonds gained HK$54.4 billion in the quarter, according to a presentation by HKMA Deputy Chief Executive Howard Lee to lawmakers Monday.

The HK$4 trillion fund acts as a backstop to ensure the stability of Hong Kong’s currency and as a stabilizer in times of crisis. It joins other funds around the world in posting losses at the start of the year as markets tumbled due to the coronavirus outbreak. The MSCI global stock index slumped 22% in the first three months of the year.

The fund clawed back some losses in April, seeing gains of about HK$30 billion to HK$40 billion, according to Lee.

Chief Executive Eddie Yue said in the same briefing that the HKMA has been gradually lowering the fund’s assets in currencies other than the Hong Kong and U.S. dollars.

It also invests in private equity and real estate. It returned an overall 6.6% last year.