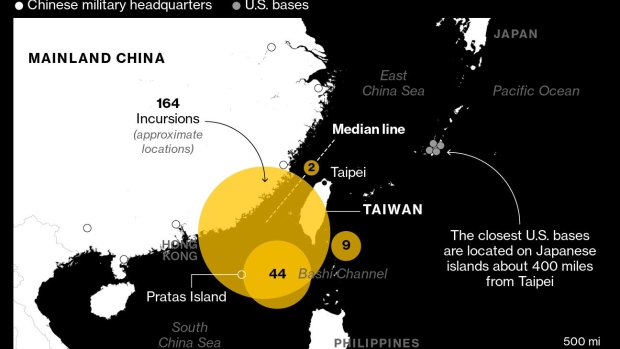 A Type 16 mobile combat vehicle fires ammunition during a live fire exercise at JGSDF's training grounds in the East Fuji Maneuver Area in Gotemba, Japan, on Saturday, May 22, 2021. A key part of US President Joe Bidens foreign policy has been turning to allies for support in addressing the security risks posed by the likes of China and North Korea, placing a greater emphasis on the Indo-Pacific region. , Bloomberg

(Bloomberg) -- During his long tenure as Japanese prime minister, Shinzo Abe deftly avoided overtures toward Taiwan that would jolt ties with China. Now, he’s joined the growing chorus of Japanese voices calling for greater support for the democratically ruled island.

The former premier was among a group of Japanese lawmakers who gathered in a large wood-paneled room in Tokyo last week for a video conference with counterparts from Taiwan and the U.S. to discuss shared concerns. Abe, who retains leadership of a key ruling party faction, said Japan couldn’t allow what happened in Hong Kong to befall Taiwan, according to broadcaster TBS.

Abe’s embrace of a more supportive policy toward Taipei is emblematic of a broader shift across the Japanese government in response to Chinese President Xi Jinping’s crackdown on Hong Kong and increased military activities in the Taiwan Strait. Deputy Prime Minister Taro Aso, a long-time Abe ally, sparked a rebuke from Beijing last month after he told a gathering that Japan would have to work with the U.S. to defend Taiwan in the event of a crisis.

Japan — which heavily relies on supply lines that pass by the island sitting as close as 110 kilometers (70 miles) to its territory — views the threat as existential. China’s disregard for international protests against its efforts to silence Hong Kong pro-democratic opposition has fueled fears in Tokyo that it might be prepared to act similarly toward Taiwan, Japanese defense officials and lawmakers said.

“The reason is China’s attitude,” said Akihisa Nagashima, a former vice defense minister and lawmaker with the ruling Liberal Democratic Party. “Until now, we expected China to have good intentions, so we didn’t say provocative things.”

The change has facilitated U.S. President Joe Biden’s effort to stitch together a more cohesive coalition to check China’s rise. Biden and current Japanese Prime Minister Yoshihide Suga affirmed “the importance of peace and stability of the Taiwan Straits” during Suga’s visit to the White House in April — the first mention of the island in such a joint statement since both countries switched formal relations from Taipei to Beijing in the 1970s.

After pushing the Group of Seven nations to issue a joint statement on Hong Kong last year, Japan has focused increasingly on Taiwan. The Defense Ministry’s annual “white paper” referred to the need for a sense of crisis over a potential U.S.-China clash around Taiwan. Meanwhile, Defense Minister Nobuo Kishi — Abe’s brother — told Bloomberg News in June that Japan sees its security as directly linked to that of the island.

U.S. Senator Bill Hagerty, a Tennessee Republican who attended the meeting with Abe last week, praised the harder line. “It was encouraging yet again to see Japan taking a much more clear-eyed view of the threat that China poses to Taiwan,” said Hagerty, who served as ambassador to Japan from 2017 to 2019.

The shift has been met with protests from China, where holding Japan to account for its imperialist history — including a half-century occupation of Taiwan — remains a potent nationalist rallying cry. Foreign Ministry spokesman Zhao Lijian dismissed the meeting attended by Abe as “negative and wrong in both form and content” and warned that agreement on Taiwan sat at the “political foundation” of China’s ties with Japan, as well as the U.S.

For more on regional security:

Liu Jiangyong, a professor of international relations at Tsinghua University, said Aso’s remarks pointed to a “fundamental change” toward Taiwan and warned that relations were “set to deteriorate” if Tokyo didn’t alter its course. “There might have already been a consensus within Japan’s right-wing forces on Taiwan,” Liu said.

So far, Suga’s government has stopped short of actions that could spark another diplomatic crisis with Japan’s largest trading partner. The last one in late 2012 saw protests and boycotts erupt in China after the Japanese government purchased a group of East China Sea islands that both sides lay claim to.

Japan has preferred more symbolic overtures toward Taiwan, such as allowing a delegation led by ex-Prime Minister Yoshiro Mori to attend the funeral for former Taiwanese President Lee Teng-hui last year. Japan also shipped millions of coronavirus vaccine doses to Taiwan, as it struggled to procure enough supply amid a dispute with China.

“Taiwan and Japan are closely-tied neighbors and have shown support for each other at difficult times,” Tsai Ing-wen, Taiwan’s current president, wrote in a July 24 Facebook post marking the start of the Tokyo Olympic Games.

Like Biden in Washington, Suga has sought to reassure Beijing that its tilt toward Taiwan doesn’t represent a shift away from its “one China” policy. His government has distanced itself from more provocative statements by China hawks, such as when Yasuhide Nakayama, the No. 2 defense official, told a Washington think tank in June that it was necessary to protect Taiwan as a “democratic country.”

“The competitive relationship between the United States and China has continued since the inauguration of President Biden, and the Biden administration emphasizes uniting with allies and responding to China’s offensive,” said Madoka Fukuda, a professor of global politics at Hosei University. “Japanese politicians also recognize that Japan should play an important role.”

Former Defense Minister Itsunori Onodera said in an interview with Bloomberg last month that the conservative wording in the Defense Ministry’s white paper probably understated the level of concern about China.

“What’s happening in reality is even more serious,” said Onodera, adding that Japan hasn’t faced a security challenge this significant since the end of World War II. “We can’t write it that strongly in the white paper, but that’s the feeling in the party.”

What role Japan, whose pacifist constitution limits the activities of its military, would play in the event of a Taiwan contingency, is unclear. One priority would be to evacuate the roughly 15,000 Japanese citizens on the island, while it might also provide support for the U.S., on whom pacifist Japan relies for much of its defense capability.

“China has without doubt built up its military with Taiwan in mind,” Onodera said. “Once a certain level of preparation is done, it’s a question of when they put it into effect. That’s the phase we’re entering now.”