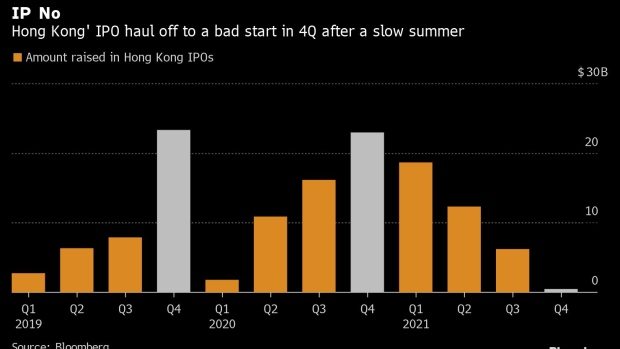 (Bloomberg) -- Hong Kong’s primary-listing market is going through a dry patch in what is normally the busiest time of the year.

Large IPOs falling by the wayside are a further sign of how China’s regulatory onslaught is causing a downturn in the financial hub’s market for first-time share sales. President Xi Jinping’s push to align companies with his vision of “common prosperity” has caused a roadblock and Hong Kong equity benchmarks are the world’s worst this year.

“Where the wind blows largely depends on the industry of the IPO-aspirant,” said Justin Tang, head of Asian research at United First Partners in Singapore. “Companies in the consumer tech and real estate related sectors will continue to experience headwinds in the form of the ‘common prosperity’ campaign and regulatory reforms.”

After a stellar first half, the value of IPOs dipped to just $6.2 billion in the third quarter -- the lowest since the start of the pandemic and behind South Korea for the first time in four years. To be sure, 2021 will still likely rank highly in terms of IPO proceeds thanks to the sheer volume of issuance in Hong Kong in the six months. With $37.7 billion raised so far, this year is on track to be one of the best of the last decade.

READ: Hong Kong Is ‘Doing Very Well’ as Hub: What to Watch in China

We Doctor’s planned float -- which could have raised as much as $3 billion -- got caught up in China’s tightening oversight of how its tech giants manage the data they collect. The Tencent Holdings Ltd.-backed company plans to refile for a Hong Kong listing but any deal won’t be quick given the time needed to update financial numbers as well as regulatory uncertainty, according to people with knowledge of the matter.

Meanwhile WM Tech, which is behind the Wumart chain and Metro AG’s outlets in China, faced questions from the bourse about its business operations, Bloomberg News reported. The company, which had been seeking to raise as much as $1 billion, is no longer actively pursuing an IPO, people with knowledge of the matter have said.

Anjuke, backed by online classified marketplace 58.com Inc., had also been targeting a $1 billion IPO, IFR reported. However the combination of falling investor enthusiasm for tech stocks as well as the current travails of China’s debt-ridden property sector mean the timing was not opportune. Anjuke may re-attempt a listing next year if the market sentiment improves, people with knowledge of the matter said.

The people asked not to be identified as the information isn’t public. Public relations department at We Doctor and Anjuke didn’t reply to emails seeking comment.