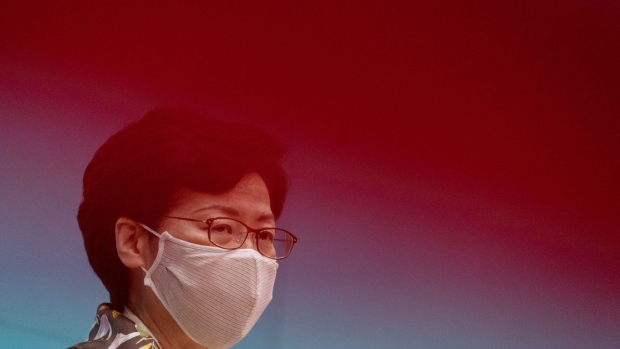 Carrie Lam, Hong Kong's chief executive, speaks while wearing a protective mask during a news conference in Hong Kong, China, on Tuesday, June 2, 2020. Hong Kong's leader said there was "no justification whatsoever" for foreign governments to place sanctions on the city, after the Trump administration moved to rescind the special trading status that distinguishes the financial hub from the mainland. Photographer: Roy Liu/Bloomberg , Bloomberg

(Bloomberg) -- Hong Kong’s leader blasted the U.S. for “double standards” in the way it handles protests after the Trump administration vocally supported sometimes-violent demonstrations in the Asian financial hub.

“Look at how the local governments handle chaos in the U.S. and what stance they took on a similar level of chaos in Hong Kong last year,” Chief Executive Carrie Lam said at a weekly news briefing Tuesday. “They are highly concerned about their national security, while holding different standards for our country, especially over Hong Kong’s situation.”

The U.S., which has passed bipartisan legislation backing Hong Kong’s pro-democracy camp, now finds itself engulfed by widespread unrest of its own, triggered by the death of African-American man George Floyd at the hands of a white police officer in Minneapolis.

Lam’s backers in Beijing have seized the opportunity to needle the Trump administration over the protests in recent days, with Chinese propaganda outlets showing scenes from the U.S. of burning buildings, harsh police responses and demonstrators decrying the government.

Lam on Tuesday addressed the possibility of U.S. sanctions, saying there was “no justification whatsoever” for any foreign governments to level them on Hong Kong.

“For the time being, I have not seen or heard any details from the U.S. administration,” she said. “My stance is to point out to the American government, and any other governments if that arises, is that they will be hurting their own interests in Hong Kong,” she added.

Earlier this week, Hong Kong’s police for the first time banned people from gathering June 4 to commemorate the 1989 crackdown on activists in Beijing’s Tiananmen Square, a day that has typically been a flashpoint for protests. In anticipation of the order, the organizer said Sunday that it planned to conduct the event online.

June 4 coincides with the final day that the Hong Kong government is enforcing social-distancing rules -- unless there are any extensions -- that bar gatherings of more than eight people. Officials have denied that the Tiananmen vigil had anything to do with the timing of the rules.

Lam said Hong Kong was cautious about further relaxing coronavirus-related social distancing measures after the discovery of a cluster of new virus cases spread within the community, and that it would make announcements on the issue as soon as possible, without giving further details. The city has seen relative success in containing the spread of the pandemic, and has slowly returned to a sense of normalcy in recent weeks.

But as parts of the world begin reopening after virus-induced closures, Lam cautioned that governments shouldn’t take measures that would further undermine the global economy.