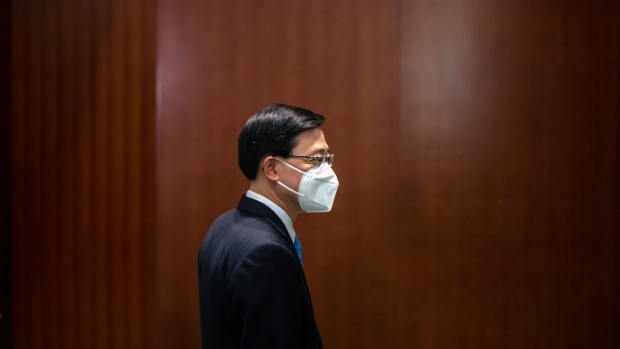 John Lee, Hong Kong's chief executive, following a Question and Answer session in the chamber of the Legislative Council in Hong Kong, China, on Wednesday, July 6, 2022. Hong Kong must not "lie flat" in its battle with Covid-19, Lee said, echoing mainland China's rejection of the "living with the virus" pandemic policy. , Bloomberg

(Bloomberg) -- Hong Kong will reduce the period of time people entering the city must spend in hotel quarantine to three days from seven, a bolder-than-expected easing of its strict travel curbs, yet still leaving the Asian financial hub isolated in a world that’s mostly reverted to pre-pandemic movement.

People arriving at Hong Kong’s international airport will be required to go to an approved quarantine hotel and, if they don’t have Covid, can then serve four days of health monitoring either at home or in a hotel, Chief Executive John Lee said Monday. The four-day period corresponds with relatively loose movement rules, with travelers able to leave their homes and only restricted from entering high-risk places.

“We want to reduce the impact from quarantine on our economic activities as well as our connection with the world,” Lee said at a briefing. The new rules come into effect Friday.

While the reduction is likely to be welcomed by residents, who have faced mandatory hotel quarantine of as many as 21 days during the pandemic, it still falls short of what business groups say Hong Kong needs in order to revive its global status.

“It is unlikely to benefit the broader business and tourist travel which will need a full lifting of quarantine controls,” David Graham, executive director of the British Chamber of Commerce in Hong Kong, said in a statement. “This will be critical for Hong Kong’s economic and business outlook. We continue to encourage the government to move toward quarantine-free travel.”

Arrivals also still face the prospect of being sent to a community isolation facility should they test positive on one of the copious number of tests they’ll be required to take.

“For Hong Kong to be back on the map for stakeholders from abroad requires them to be able to come and leave as they would nearly everywhere else, that is without quarantine, tests on arrival or the worry that they may be sent to an isolation center if they should contract Covid while they’re here,” said Johannes Hack, president of the German Chamber of Commerce, Hong Kong.

Hong Kong has been making incremental changes to its virus measures after an omicron-driven outbreak engulfed the city earlier this year. The reduction to the quarantine period follows the removal of flight suspensions last month that imposed snap bans on certain routes if they inadvertently brought in Covid-infected passengers, making it difficult for travelers to plan their trips.

The easing measures implemented during Lee’s early days in office are part of his plan to restore the city’s stature without alienating Chinese officials committed to rooting out the virus.

Reducing quarantine for international arrivals isn’t in conflict with reopening the border with China and the two sides are communicating on the topic, according to Lee. He said he hopes that by explaining Hong Kong’s situation, the city can reach an understanding with mainland officials that there is room to gradually reduce cross-border travel inconveniences.

Reduced quarantine may not entirely ease headaches for travel into Hong Kong. Rooms are in short supply, costs are high, while anyone who is infected in the days before their trip is forced to delay travel. Travelers will also face a busy schedule of tests.

Officials also unveiled a tiered health-code system reminiscent of what’s used in mainland China. A yellow code will be given to inbound travelers, which they’ll keep until they finished health surveillance, while anyone testing positive will be given a red code. A blue code will be shown in the city’s LeaveHomeSafe app once the quarantine or health monitoring period has ended.

Lee made no mention of whether Monday’s announcement was a first step to scrapping quarantine entirely, even as curbs weigh on the economy. Gross domestic product contracted 1.4% in the second quarter from a year earlier. The city reported more than 4,000 infections on Sunday.

Schools will continue to operate under half-day class arrangements in the upcoming school year until further notice, the government said on Friday. An isolation facility with 3,000 units at the site of the city’s old airport has just been launched, with the security minister highlighting sea views from some of the rooms in a social media post.