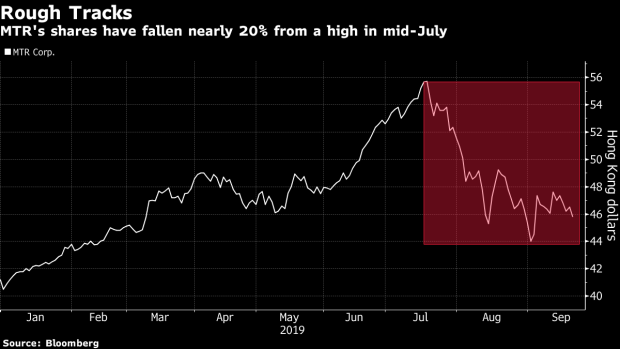 (Bloomberg) -- Anti-government protests have caused a drop in passenger numbers on Hong Kong’s subway, according to the chairman of mass-transit operator MTR Corp., which has been a regular target of demonstrators and the scene of violent clashes since June.

“We are seeing a downtrend of people using the system,” Rex Auyeung said in an interview with Bloomberg Television. Auyeung only became MTR’s chairman in July, a month after unrest started boiling over and spilling into the subway, which carries more than five million passengers a day, according to government data.

Local opposition to an extradition bill has grown into a broader movement against Beijing’s tightening grip on Hong Kong. Protesters have disrupted train services, smashed windows, sprayed graffiti and lit fires outside stations, while police have fired tear gas and wielded batons. On top of the property damage, which Auyeung said amounts to HK$30 million to HK$40 million ($3.8-$5.1 million), MTR has been criticized of bias by both China’s state-run media and protesters. Its share price has fallen 18% in two months.

Auyeung said he was surprised MTR had become a target. “It’s like going through turbulence,” he said in his first TV interview since becoming chairman. He said there’s only been a “small drop” in passengers, and that’s probably because more people are choosing to stay home on weekends, when many of the most intense protests have taken place.

Auyeung said it’s too early to predict the impact protests have had on revenue.

Both Moody’s Investors Service Inc. and Fitch Ratings Inc. downgraded MTR’s outlook following tweaks to their views on Hong Kong because of the unrest. Janet Liu, associate director at Fitch, said the financial impact of the disruptions is limited thanks to solid public demand and multiple revenue streams. MTR also owns assets and operates railway lines in mainland China, the U.K., Australia and Sweden.

While looking for overseas opportunities is “a necessity” for the company’s growth, the core business remains in Hong Kong and protests won’t affect its development strategy, he said.

Adding to MTR’s troubles, three of its train carriages derailed in Kowloon during Tuesday morning rush hour, leaving eight people injured and forcing the suspension of services on part of the network. Auyeung apologized about the accident and said a group of specialists is investigating.

MTR recorded HK$28.3 billion in revenue for the six months through June, an increase of 7.2% from last year. The company declared an interim dividend of HK$0.25 per share.

--With assistance from Sebastian Chau, Adrian Wong and Kismet Singh.