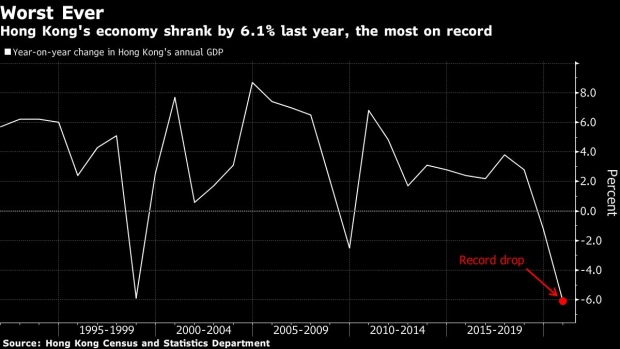 (Bloomberg) -- Hong Kong is heading for a record budget deficit, leaving little room for the kind of cash handouts and stimulus Financial Secretary Paul Chan doled out in 2020 during the coronavirus outbreak.

Chan is expected to deliver a muted budget Wednesday as he tries to balance fiscal pressures with the demands of an economy that’s shrunk two years in a row already. There’s unlikely to be a repeat of the HK$10,000 ($1,290) payout given to all Hong Kong residents a year ago, economists said. Instead, Chan is expected to focus on steps to spur infrastructure investment, including housing, explore new ways to raise revenue and boost options for green investments.

“More fiscal stimulus will be announced in the upcoming budget, but the size of the measures will likely be less ambitious,” said Tommy Wu, senior economist with Oxford Economics. “The government does not want its fiscal health to deteriorate too much given that it expects to run fiscal deficits in the medium term.”

The government pumped in almost HK$320 billion in stimulus last year to support an economy that was already reeling from social and political unrest in 2019 when it was hit by the pandemic. Gross domestic product contracted a record 6.1% in 2020, with unemployment surging to the highest in more than 16 years as tourism dried up.

Chan is set to deliver his budget speech at the Legislative Council on Wednesday at 11 a.m. local time. Here’s a look at some of the key areas he’s likely to focus on:

Chan has warned the budget deficit will reach a record of some HK$300 billion in the current fiscal year ending on March 31, putting a serious strain on the government’s resources. The fiscal reserve, which peaked at over HK$1.2 trillion in January 2019, shrank to less than HK$900 billion as of December.

The deficit is expected to remain significant in the coming year as well, “setting a very challenging precondition for the new budget,” Chan said in a Feb. 21 blog post.

The city’s limited financial resources also makes it difficult for the government to provide more cash handouts, Chan said in an interview with local media earlier this month.

Oxford’s Wu said government shouldn’t spend all or most of its reserves as there’s a need to increase spending in coming years to “address fundamental economic and social challenges.” Still, there’s room for an expansionary policy stance to reduce unemployment and inequality, he said.

Hong Kong is not alone in straining to implement further stimulus. Financial rival Singapore also unveiled a budget last week that included plans to rein in its fiscal deficit as the economy there recovers. The city-state is digging into reserves for a S$11 billion ($8.3 billion) package to help households and businesses cope with the aftermath of the pandemic.

Singapore’s budget is stingy “but Hong Kong’s will be even stingier,” said Alicia Garcia Herrero, Asia Pacific chief economist with Natixis SA. “It seems that cash handouts will be limited, if not eliminated, while there will be more infrastructure spending.”

Hong Kong is making progress combating the virus, announcing plans to begin inoculations by the end of the month and allowing the reopening of theme parks and cinemas.

Compared with the crisis management of last year, the government should shift its focus to reinvigorating the economy, said Aries Wong, a lecturer at Hong Kong Baptist University.

“Ideally, money should be spent on items that help people to work and firms to do business under the pandemic rather than those that just keep people and firms alive,” he said.

The widening deficit may force the government to explore new sources of revenue, with some local politicians pushing for an increase in stamp duties on stock trading to 0.2% from 0.1%. The duties are an important revenue source, generating about HK$33.2 billion in the 2019-2020 fiscal year.

Raising taxes on stock trading may be a more feasible alternative to other options like hiking value-added taxes, Natixis’ Garcia Herrero said.

“After all, the financial assets have ballooned but the real economy is lagging,” she said.

Alice Leung, corporate tax advisory partner at KPMG China, warned the measure could have a chilling effect on equity volumes as other jurisdictions consider tax cuts.

“The government will prioritize on public housing and infrastructure investments as those two can boost the GDP number quickly and at the same time provide more affordable housing and create jobs,” said Iris Pang, chief economist for Greater China at ING Bank NV.

Local media have hinted at the following measures that may be announced in the budget: