As Hong Kong’s fortunes swelled alongside mainland China’s, the city’s richest man was already investing elsewhere. That move has shielded Li Ka-shing’s flagship company from the brunt of the tumult now enveloping the city.

CK Hutchison Holdings Ltd., which encompasses the Li family’s assets including ports, telecommunications and retail, counted on its home base for only 10 per cent of revenue last year. The share was 16 per cent in 2015 following the separation of its property business eventually into CK Asset Holdings Ltd. in a reorganization of the group.

Years of diversification into Europe, North America and Australia have made CK Hutchison the least exposed among Hong Kong conglomerates to the months-long political protests against Beijing’s grip over the semi-autonomous city. After tumbling to a seven-year low this month, the shares of the company have pared some of their losses, outperforming local peers in the past week.

Li, 91, saw the risks of placing all his bets in one place and started diversifying 25 years ago to “ensure he’s out of Hong Kong when everything hits the fan,” said Richard Harris, chief executive officer of Hong Kong-based Port Shelter Investment Management. “Li does stand out as easily the smartest of the big guys in Hong Kong.”

Representatives for CK Hutchison and CK Asset didn’t respond to requests for comments. 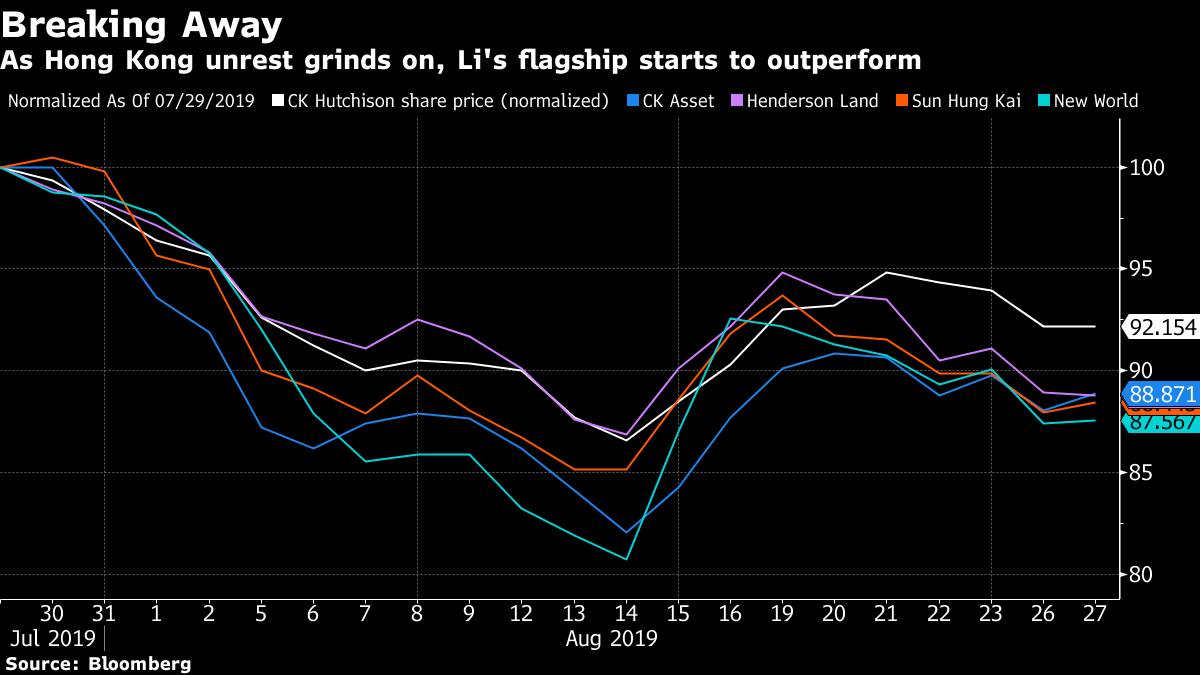 After the Tiananmen Square massacre in 1989, Li — called “Superman” by his admirers for his investment calls — started to look for assets outside China. He bought Canada-based Husky Oil Ltd. and expanded his telecommunications business into the U.K. and Australia. Last year, the energy and telecom businesses accounted for 33 per cent of CK Hutchison’s profit before interest and tax.

The family’s real estate arm is more exposed. With about 73 per cent of CK Asset’s revenue coming from Hong Kong and mainland China, Li’s son and successor, Victor, is following in his father’s footsteps by looking overseas to expand the property business.

Earlier this month, CK Asset agreed to pay 2.7 billion pounds (US$3.3 billion) for Greene King Plc, which operates more than 2,700 British bars, restaurants and hotels. Shaun Tan, an analyst at UOB Kay Hian in Hong Kong, said the group has been looking into “giant acquisitions overseas” for more than a year.

Yet, some of Li’s investments outside China are facing geopolitical risks. After the U.K. voted in June 2016 to exit the European Union, Li said the country and Europe would face “considerable challenge” for two to three years, an assessment that’s been borne out by events. CK Hutchison shares have dropped 24 per cent since the June 2016 referendum, compared with a 23-per-cent gain in the Hang Seng benchmark as of the Aug. 26 close in Hong Kong.

“Nobody can predict the long future but foresight and balancing between diversification and localization is really important,” said Fan, a specialist in governance of family-owned businesses in Asia. He said companies with a substantial stake in Hong Kong and mainland China should “seriously think about what they can do elsewhere.”

--With assistance from Matt Turner