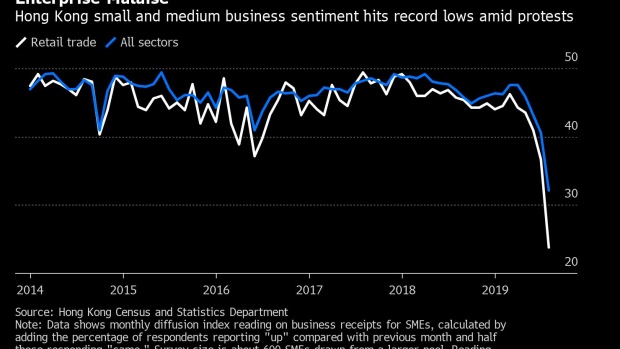 Pedestrians and shoppers walk past stores in the Yuen Long district of the New Territories in Hong Hong, China, on Tuesday, July 23, 2019. A rally of more than 100,000 people in Hong Kong devolved into a night of violence on Sunday, with police firing tear gas after protesters gathered in front of China's liaison office in the city and defaced the national emblem. Masked men wearing white shirts and wielding batons, some suspected to be linked to triads, later attacked people in a metro station and mall in the mainland border town of Yuen Long. Photographer: Paul Yeung/Bloomberg , Bloomberg

(Bloomberg) -- Sentiment among Hong Kong’s small- and medium-sized businesses continues to deteriorate, hitting fresh lows in August as anti-government protests raged in the streets driving tourists away from key retail, restaurant and hospitality industries. Indexes tracking business receipts in retail trade and across all sectors dropped further below the 50 level which separates favorable and unfavorable conditions, according to the latest data from Hong Kong’s Census and Statistics Department dating back to 2011. Visitor arrivals plunged about 40% in August, according to Financial Secretary Paul Chan, the worst year-on-year change since the 2003 SARS crisis.

To contact the editors responsible for this story: Christopher Anstey at canstey@bloomberg.net, Jeffrey Black, Matt Turner