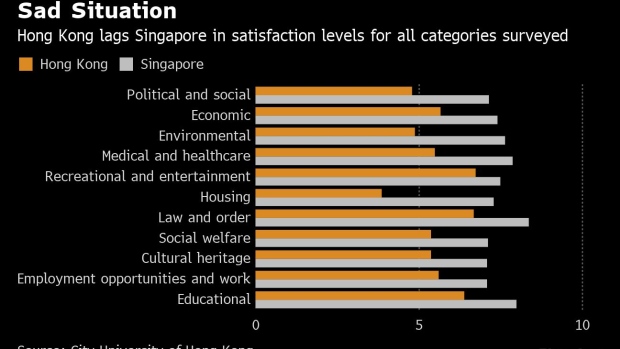 (Bloomberg) -- Hong Kong’s youth were less happy than their peers in Singapore even before historic protests erupted against legislation allowing extraditions to China, a survey by the City University of Hong Kong showed.

Researchers polled 2,304 people under the age of 40 -- with roughly half of the respondents in Hong Kong, and the other half in Singapore -- to gauge the relative appeal of living in the two rival Asian financial hubs. The “Happiness Index” study was conducted from January to June, just before demonstrations began.

The study found that Hong Kong residents rated their happiness levels at an average of 6.80 on a scale of 1 to 10, compared with 7.48 for Singaporeans. Of 11 poll categories covering satisfaction with political, recreational and economic conditions, people in Hong Kong -- the world’s priciest personal property market -- were the least pleased with their housing conditions.

Hong Kong’s historic protests, which began in early June, have been led in large part by students and other young people. They have morphed into a wider movement against growing Chinese influence over the city, with calls for Beijing-backed Chief Executive Carrie Lam to step down and escalating clashes between demonstrators and police.

“The protests have led to a group of young people becoming depressed because they feel helpless. The government is not listening to them,” Wong said, calling on Lam’s government to invite their youth for talks in order to resolve the issue. “If nothing is done in the near future, the numbers may grow rapidly to the point of no return.”

He said that increased malaise among Hong Kong’s youth would cause it to fall behind Singapore. “Hong Kong has already been overtaken by Singapore in many ways,” he said. “If this goes on, we will lose in every way.”

To contact the reporter on this story: Sheryl Tian Tong Lee in Hong Kong at slee1905@bloomberg.net