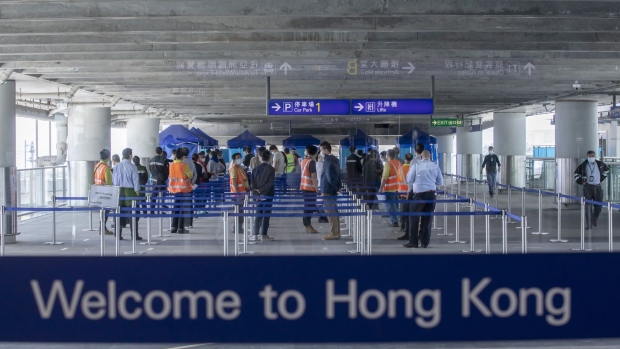 Employees stand in line at a Covid-19 testing center dedicated for airport workers set-up at the Hong Kong International Airport in Hong Kong, China, on Thursday, Feb. 4, 2021. The Asian financial hub has been attempting to curb a fourth wave of Covid-19 infections with targeted lockdowns that have seen authorities cordon off an area and restrict movement until residents receive negative results. Photographer: Paul Yeung/Bloomberg , Bloomberg

Hong Kong will postpone for at least two weeks a plan to start antibody testing at the airport for fully vaccinated people arriving from some areas, people familiar with the matter said, a setback in easing one of the strictest quarantine restrictions in the world.

The delay in the second phase of its antibody-testing plan was a result of rising infections overseas sparked by the delta variant, said the people, who asked not to be identified because they’re not authorized to speak publicly. There is no definite timeline for introducing the tests, which are meant to confirm that a person has been vaccinated or has recovered from Covid-19, one of the people said.

Hong Kong has faced criticism from its expatriate community and business people from some countries who are required to quarantine at a hotel for two weeks at their own expense and undergo multiple tests when arriving in the city, even if they are fully vaccinated.

The government has placed a priority on re-opening its borders with China, which requires an extended period of no local infections. Any easing of controls for arrivals from other countries could jeopardize its plan to reopen to the mainland and Macau, one of the people said.

Hong Kong’s government did not immediately respond to a request for comment. The South China Morning Post reported on the postponement earlier Saturday.

The city approved the plan to cut mandatory hotel quarantine to seven days for fully vaccinated people traveling from all but a handful of high-risk places last month. The first phase was introduced in June and applied only to Hong Kong residents. It required travelers to receive designated antibody tests at recognized local medical laboratories at their own cost before departing the city.

The government previously said it would implement the second-phase arrangements for inbound travelers in July to provide a self-paid antibody testing service at the airport.

Under the current plan, travelers from “extremely high-risk” and “very high-risk” areas, including the U.K., Russia and Ireland, are excluded from the shorter hotel quarantine even if they are vaccinated. The list is updated regularly.