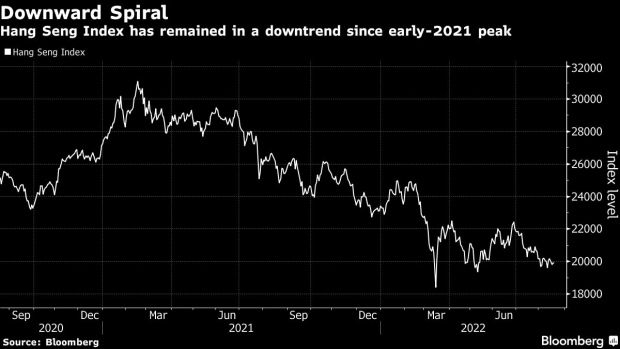 (Bloomberg) -- A historic revamp of Hong Kong’s benchmark stock index may drag into next year as the index compiler falls behind in boosting representation of new economy firms, market watchers say.

Hang Seng Indexes Co. -- which will announce results from a quarterly review late Friday -- is still 11 members away from a plan to boost constituents to 80 by mid-2022. But the firm is “finding it tough to reach the target by excluding unprofitable companies” and is unlikely to attain its goal this year, Brian Freitas, an analyst who publishes research on Smartkarma, wrote in a note.

The goal is part of a wide-ranging overhaul of the Hang Seng Index announced in March 2021. Just three to four stocks have joined the 69-member benchmark in each of its quarterly rebalances since then, a pace that’s slower than some market watchers had expected.

A representative for the compiler could not be reached for comment.

Given the large number of additions pending, “Hang Seng’s revamp might not be finalized until 2023,” Bloomberg Intelligence analyst Marvin Chen wrote in a note. Baidu Inc., Kuaishou Technology and JD Health International Inc. are among the possible inclusions in the latest reshuffle, he added.

The Hang Seng Index has lost 16% this year amid a regulatory overhang, rising Sino-US tensions and China’s ongoing Covid outbreak.