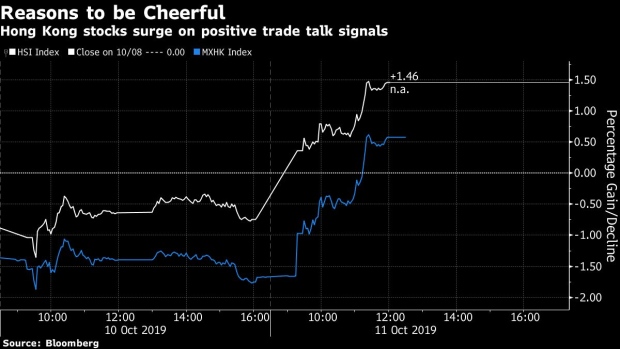 (Bloomberg) -- Hong Kong’s battered stocks are poised for their best day in more than a month as trade optimism builds.

The MSCI Hong Kong Index added 2.3% as Asia’s best performer as of midday Friday. The Hang Seng Index was up 2.2%, with developers and technology stocks leading gains in a positive end to a week in which trade headlines roiled markets.

China and the U.S. have signaled cautious optimism in securing a partial deal for a temporary truce on tariffs. President Donald Trump said discussions with China are going “really well” and that he plans to meet China’s Vice Premier Liu He on Friday.

“Hong Kong stocks trade at valuations that are very attractive for long-term investors, and you see capital coming into the market amid optimism over trade talks between the U.S. and China,” he said.

“Even after today’s rebound in the Hang Seng Index, stocks in Hong Kong are still behind compared to A-shares or U.S. stocks in the near-term. If optimism over trade holds, they could be an attractive long-term buying opportunity.”

The outlook for Hong Kong remains clouded, with the city facing its first recession since the global financial crisis. The Hang Seng Index tumbled 8.6% last quarter, the biggest loss among major global gauges tracked by Bloomberg. Developers and mall operators dropped as escalating protests weighed on the economy and deterred travelers to the city.

Hong Kong was braced for another weekend of demonstrations. There were signs protesters may consider less aggressive tactics, after the most destructive weekend since the movement began over four months ago in opposition to now-withdrawn legislation that would’ve allowed extradition to mainland China.

To contact the editors responsible for this story: Richard Frost at rfrost4@bloomberg.net, David Watkins, Kevin Kingsbury