Hong Kong real estate giants including Henderson Land Development Co. suffered the biggest selloff in more than a year as traders speculated China will extend its property clampdown to the financial hub. Intensifying concerns about China Evergrande Group’s debt crisis dragged down everything from bank stocks to Ping An Insurance Group Co. and high-yield dollar bonds. One little-known Chinese property developer plunged 87 per cent before shares were halted.

Hong Kong’s benchmark Hang Seng Index slumped 3.3 per cent, its biggest loss since late July. The selling also spilled over into the Hong Kong dollar, offshore yuan and S&P 500 Index futures. Holiday closures in much of Asia may have exacerbated the volatility, traders said.

Faced with uncertainty over how far Xi is willing to go with his market-roiling campaigns to achieve “common prosperity” and rein in overindebted companies, many investors are choosing to sell first and ask questions later. Interest payment deadlines this week on several Evergrande bonds and bank loans add another layer of risk as market participants brace for what could be one of China’s largest-ever debt restructurings.

“The price action across several asset classes in Asia today is horrendous due to rising fears over Evergrande and a few other issues, but it could be an overreaction due to all of the market closures,” said Brian Quartarolo, portfolio manager at Pilgrim Partners Asia. 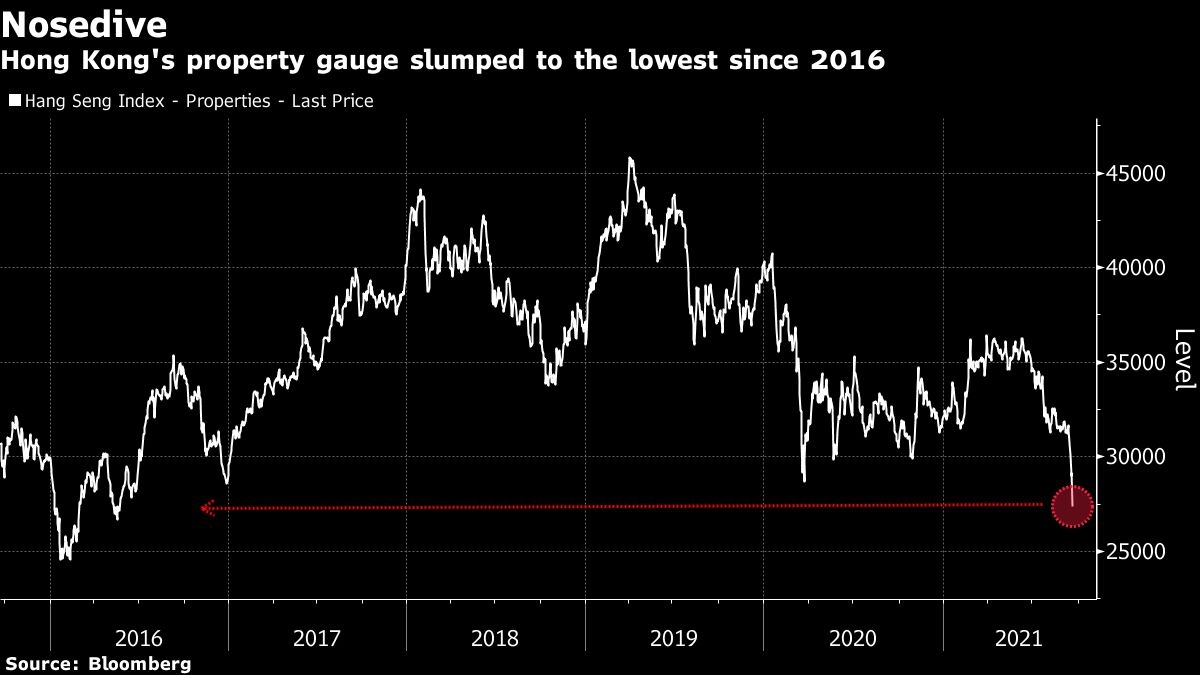 Xi faces a tricky balancing act as he tries to reduce property-sector leverage and make housing more affordable without doing too much short-term damage to the financial system and economy. Mounting concerns that he’ll miscalculate are spreading ever-further beyond China-focused property developers and their suppliers.

“It’s what the Chinese would describe as trying to get off a tiger,” said Justin Tang, head of Asian research at United First Partners.

Chinese policy makers may be able to avoid a financial crisis, but the Evergrande ordeal could still inflict lasting damage to credit conditions and the economy, Societe Generale SA analysts wrote in a note on Monday.

“The repercussions from Evergrande’s prospective collapse will likely contribute to China’s ongoing economic deceleration, which in turn anchors global growth and inflation, and casts a pall over commodity prices,” wrote analysts led by Phoenix Kalen, head of emerging-market strategy in London.

Hong Kong real estate companies took the brunt of the selling Monday, with the Hang Seng Property Index tumbling 6.7 per cent for its biggest drop since May 2020. Henderson Land plunged 13 per cent and Sun Hung Kai Properties Ltd. sank 10 per cent, the most since 2012.

Chinese officials told Hong Kong developers that Beijing is no longer willing to tolerate what it calls monopoly behavior, Reuters reported Friday. The officials didn’t lay out a roadmap or a deadline, according to Reuters, which cited unidentified developers.

Hong Kong’s government has long struggled to bring home prices under control amid outsized demand, limited supply and low borrowing costs. The city’s average property value was a world-beating US$1.25 million as of June 2020, according to CBRE Group Inc.

“This is a paradigm shift,” said Hao Hong, chief strategist at Bocom International, referring to the Reuters report. “People need to keep a close look.”

Ping An Insurance declined 5.8 per cent to a more than four-year low on concerns about its property-sector exposure. The company issued a statement Friday saying that its insurance funds have “zero exposure” to Evergrande and other real estate companies “that the market has been paying attention to.” Real estate accounts for about 4.9 per cent of Ping An Insurance’s investments, versus an average 3.2 per cent for peers, according to Bloomberg Intelligence.

In credit markets, the average price of high-yield dollar notes from Chinese borrowers slid some 2 cents Monday, set for the worst decline in about a year. That dragged down prices in the broader market for Asian junk bonds by 1 to 2 cents, traders said. Even debt with investment-grade ratings was stung. Yield premiums on notes from Country Garden Holdings Co., China’s largest developer by sales, widened to a record.

The Hong Kong dollar fell to the lowest level this month, while the offshore yuan declined for a third day. FTSE China A50 Index futures slid 3.2 per cent  in Singapore. Mainland financial markets are closed for public holidays until Wednesday, when Hong Kong will be shut. S&P 500 Index futures dropped 1.2 per cent. 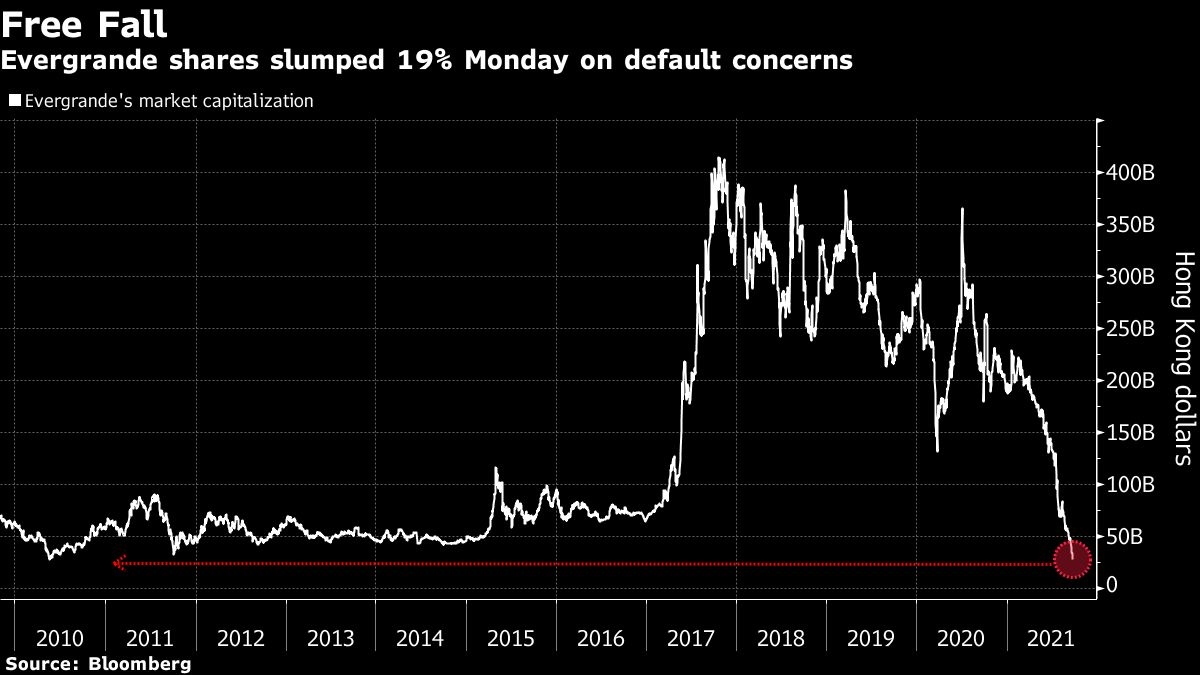 Evergrande is scheduled to pay interest on bank loans Monday, with a one-day grace period. While details on the amount due aren’t publicly available, Chinese authorities have already told major lenders not to expect repayment, people familiar with matter said last week. Evergrande and banks are discussing the possibility of extensions and rolling over some loans, the people said.

Payments due Thursday include US$83.5 million of interest on an 8.25 per cent, five-year dollar bond, Bloomberg-compiled data show. Evergrande needs to pay a 232 million yuan (US$36 million) coupon on an onshore bond the same day. The developer’s stock sank by as much as 19 per cent on Monday to the lowest level since 2011. Its dollar bond due 2022 was indicated down 3.1 cents on the dollar at 26 cents, set for a record low.