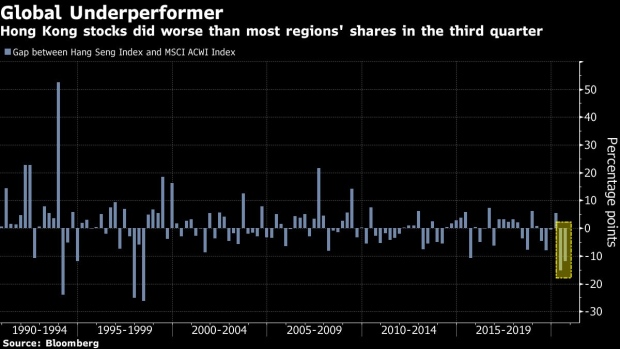 (Bloomberg) -- Stock investors lost more money in Hong Kong than in most places this quarter. Again.

The Hang Seng Index has lost nearly 3%, lagging MSCI Inc.’s gauge of global stocks by more than 10 percentage points for a second quarter running. The Hong Kong benchmark has not seen back-to-back underperformance of that magnitude in data going back to the 1990s. Nearly a third of Hang Seng members lost 11% or more during the period.

A massive rally in the onshore market and a strengthening yuan had helped drive a promising start to the third quarter, but optimism quickly faded. The index is down 10% from its July high and has breached almost every major support level. Locally-listed mainland banks made up the bulk of the quarter’s worst performers, weakened by Beijing’s call to sacrifice profits to ease the financial hardship of people and businesses hurt by the pandemic, low interest rates and souring loans.

Investors have few reasons to be bullish toward Hong Kong shares, which are among Asia’s worst performers this quarter. Risks include the prospect of U.S. moves against Chinese companies before the November presidential election. Among the Hang Seng’s biggest stocks, Tencent Holdings Ltd. and HSBC Holdings Plc have become embroiled in tensions between Beijing and Washington. Adding to the gloom is an uncertain outlook for China’s economy -- many Chinese firms listed in Hong Kong derive the majority of their income from the mainland.

Tencent had to grapple with President Donald Trump’s effort to ban its messaging app WeChat. The tech giant has gained 4% this quarter, a significant slowdown from its 33% rally in the first half of the year.

HSBC, the third most heavily-weighted stock on the Hang Seng Index, is the worst performer on the gauge this year. Investors have turned bearish on the lender amid accusations of money-laundering and speculation its massive push into China could be thwarted. Its shares tumbled 17% this quarter and hit a 25-year low.

The Hong Kong dollar has been a bright spot in the market. Capital inflows chasing local new listings have pushed the currency toward the strong end of its trading band with the greenback. The city’s de-facto central bank sold a total of $22.9 billion worth of the local dollars to defend its foreign-exchange peg since April, helping to boost interbank liquidity to the highest in three years.

“Stocks will likely remain volatile in October, as more bad news may come before the U.S. elections, given Trump is expected to build his campaign around confronting China” said Banny Lam, head of research at CEB International Investment Corp. “After that, the market direction will be determined by China’s economic recovery, as well as corporate earnings.”