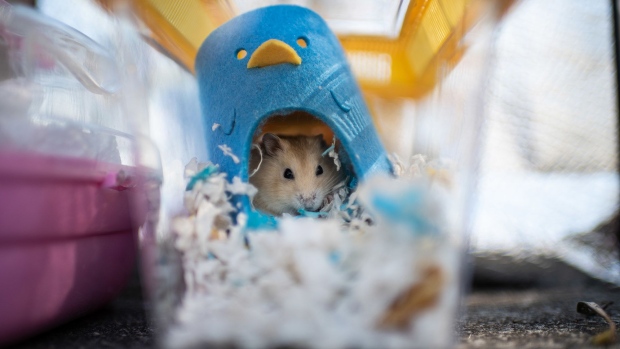 HONG KONG, CHINA - JANUARY 20: A hamster sits in a cage after being adopted by volunteers who stopped an owner from surrendering it to the government outside the New Territories South Animal Management Centre on January 20, 2022 in Hong Kong, China. Hong Kong's pet shop owners have criticized but complied with a government decision to cull hamsters and temporarily ban imports of small animals over possible Covid-19 transmission links to humans. Though no existing literature suggests a link, the territory will proceed with the cull, angering many pet owners and animal rights advocates. (Photo by Louise Delmotte/Getty Images) , Photographer: Louise Delmotte/Getty Images AsiaPac

(Bloomberg) -- Hong Kong researchers have found evidence that pet hamsters can spread Covid-19 to people, and linked the animals to human infections in the city.

The study, published Saturday in The Lancet as a preprint and not yet peer-reviewed, provided the first documented evidence of hamster-to-human transmission of the Delta variant. Researchers from the University of Hong Kong and the city’s government found two independent cases of such transmission, after testing viral swabs and blood samples from animals collected from local pet shops.

The hamsters in question were infected around Nov. 21, before they were imported to Hong Kong, suggesting pet animal trade may be a pathway that facilitates Covid to spread across borders, according to the study.

“This study reveals that pet hamsters can acquire SARS-CoV-2 infection in real-life settings and can transmit the virus back to humans”’ the researchers said in the study. “The SARS-CoV-2 circulating in hamsters can allow sustainable virus transmission in humans.”

The Hong Kong government ordered the culling of thousands of hamsters after the infections at pet shops. It advised members of the public earlier this month to surrender hamsters purchased on or after Dec. 22 for “humane dispatch,” after some pet store workers and customers tested positive for the virus, and some of the animals imported from the Netherlands at the store tested preliminary positive.