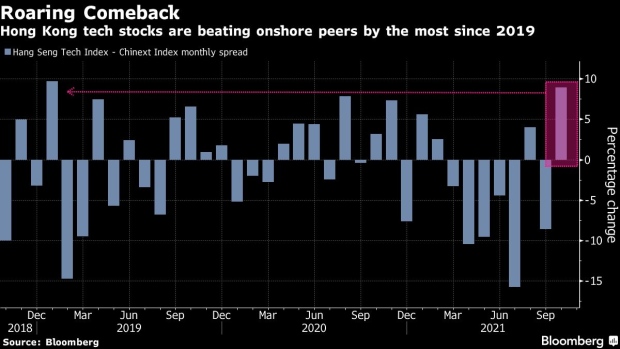 (Bloomberg) -- Hong Kong-listed technology stocks are on track to outperform their mainland China counterparts by the most in almost three years, with cheaper valuations and easing regulatory concerns drawing investors.

The Hang Seng Tech Index, which is up in eight of the past 10 sessions, has jumped more than 10% so far in October, compared with a gain of just 1.2% by the ChiNext Index. The Hang Seng gauge is heading for its biggest outperformance relative to the onshore-focused index since January 2019.

Some investors, including BlackRock Inc., say that Beijing’s regulatory crackdown on companies has been mostly priced in. China’s Internet giants, who are listed in Hong Kong, have been on the government’s radar for alleged monopolistic practices.

Kuaishou Technology and Alibaba Group Holding Ltd., both up more than 20% this month, are the top contributors to the Hang Seng measure’s advance, as demand for bearish options on the latter tumbled. Streaming platform company Bilibili Inc. has also rallied in Hong Kong ahead of its earnings release, with analysts expecting advertisement revenues to drive growth.

Some of China’s growth stocks are now “reasonably valued so we have already started picking up some of those names” in model portfolios, Rupal Agarwal, Asia quantitative strategist at Sanford C Bernstein told Bloomberg Television in an interview. Companies that are not trading at very extreme multiples, such as Tencent Holdings Ltd. and JD.com Inc., are “now appearing on our quant screens,” she added.