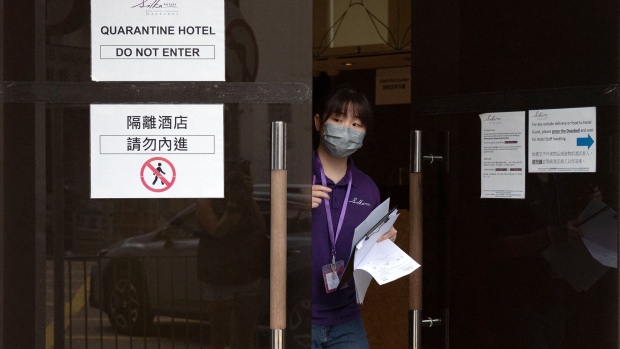 A traveler heading to quarantine in the arrival hall at Hong Kong International Airport, on Aug. 8. Photographer: Bertha Wang/Bloomberg , Bloomberg

(Bloomberg) -- Hong Kong Chief Executive John Lee will announce an end to hotel quarantine at a press conference slated for 3:30 p.m. on Friday, according to people familiar with the matter.

The government will scrap the previously mandatory measure and a requirement that arrivals get a negative PCR test before boarding a plane, according to people who asked not to be identified discussing the changes. Those who test positive after arrival won’t be sent to the Penny’s Bay isolation facility, the people said. Travelers who aren’t infected will be allowed into public venues like restaurants and bars after three days of home monitoring, they said.

Senior officials met earlier in the day for a final discussion on changes to Hong Kong’s Covid measures, which are among the strictest in the world. The moves come as the city faces unprecedented economic challenges and pressure to open up globally as it falls further behind its regional rival Singapore.

Hong Kong has been gearing up to ease its travel curbs after following China’s Covid Zero lead throughout the pandemic, though it’s unclear if the changes will be enough to quickly revive the once-vibrant financial hub. Several high-profile events including an international banking summit and the iconic Rugby Sevens tournament are slated to begin in November. Bankers stipulated that a cut in quarantine rules would be needed in order for them to attend.

“To be meaningful, any relaxations should enable us to be at least at par with international centers,” said Sally Wong, chief executive officer of Hong Kong Investment Funds Association, whose members include both regional firms and some of the world’s largest asset managers, such as BlackRock Inc. and FIL Investment Management.

A representative from the Hong Kong government didn’t immediately respond to a request for comment.

The changes could take effect by mid-October, said Michael Tien, a National People’s Congress deputy and city lawmaker. There are still some details that need to be ironed out, including the need to beef up testing capability at the airport to get faster results after people arrive and the potential for isolation hotels for those who test positive, he said in an interview with Bloomberg TV.

Hong Kong’s Covid controls have taken a heavy toll on the economy, especially the tourism-reliant retail sector. The economy shrank significantly in the first half of 2022 and there’s a “very high chance” of contraction for the full year, Financial Secretary Paul Chan told reporters on Thursday. If that’s the case, it would be the third time since 2019 that annual gross domestic product declined.

Tax revenue has also taken a huge knock from a weakening economy, with Hong Kong likely to post a fiscal deficit double what it initially estimated, Chan said earlier this week.

Hong Kong Chief Executive John Lee has been rolling back restrictions in the city since he took office in July.

Earlier this week he said he wants to relax policies including mandatory hotel quarantine that have kept travelers away. Those plans were seemingly blessed by Beijing, with Huang Liuquan, deputy director of China’s Hong Kong and Macau Affairs Office, saying Tuesday that mainland officials see no problem with the change.

The relaxation comes as the city’s daily Covid cases are declining, falling to about 6,000 a day from more than 10,000 earlier this month. Most are local infections, with 163 imported cases reported Thursday. Health officials acknowledged this week that the city is unlikely to ever return to zero infection, with the virus expected to linger in the community.

There’s no public health risk from ending the travel restrictions, said Benjamin Cowling, chair of epidemiology at the University of Hong Kong. The current Covid strains are already spreading in the city and future variants will quickly find their way in regardless of travel curbs, he said.

“Local transmission is controlled by domestic control measures,” Cowling said. “Travel measures can reduce the rate of imported cases from low to very low, and are most useful for locations with zero daily local cases.”

The news was first reported by local broadcaster Cable TV and TVB.

(Adds that home monitoring to be cut to three days in the second paragraph, comment from the Hong Kong Investment Funds Association in the fifth paragraph)