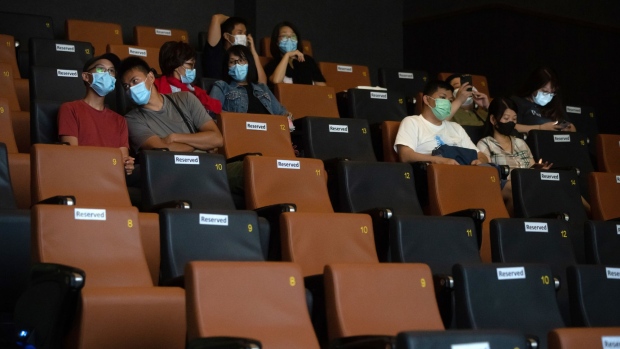 (Bloomberg) -- Hong Kong is expected to ban films that run contrary to the interests of a Beijing-drafted national security law, the latest crackdown on freedom of expression in the Asian financial hub.

The city’s opposition-free legislature is set to amend the Film Censorship Bill on Wednesday, turning movie censors into gatekeepers of the security law with penalties as high as HK$1,000,000 ($130,000) and three years in prison for those who screen non-approved content.

Inspectors could search without a warrant a premises showing a film, including company offices or a private members’ club, and the Film Censorship Authority can demand more information about a screening under the new rules.

Questions hang over how the changes would impact streaming services such as Netflix Inc., which offers a documentary on student activist Joshua Wong in Hong Kong, for example. Netflix declined to comment, while Vimeo Inc., Amazon.com Inc. and Apple Inc. didn’t reply to questions about the changes.

“It is a treacherous climate for businesses having to make content decisions,” Darrell West, senior fellow at the Center for Technology Innovation at the Brookings Institution, said of the law, which makes no mention of online content but has repeated references to videotapes.

The changes are part of a wider legal assault on the freedom of expression and information once prized in the former British colony, but severely reduced in mainland China. Since the security law passed in June 2020, the city legislature has adopted an anti-doxxing law, moved to limit information available in the companies registry, and curtailed the content of public broadcaster Radio Television Hong Kong, which has axed programs critical of the government.

The city’s leader Chief Executive Carrie Lam said the Legislative Council had “delivered a brilliant performance” since all the political opposition had either been arrested, disqualified or resigned after Beijing mandated national security officials approve candidates. “They have done really well in terms of legislative amendments and proposals,” Lam said in a regular press briefing Tuesday.

Censorship had seeped into the industry even before the proposed changes. In March, a local theater pulled the prizewinning documentary “Inside The Red Brick Wall” about 2019 anti-government protests. The film’s distributor, Ying E Chi, lost its government funding soon after.

Around the same time, the University of Hong Kong warned its student union that a screening of a documentary on the pro-independence activist Edward Leung could violate the security law.

Then in June, the government updated the censorship guidelines in relation to the security law, instructing censors to watch out for content “capable of being perceived as endorsing, supporting, promoting, glorifying, encouraging or inciting such acts or activity.”

The proposals to bake such censorship into law were “dictatorial manoeuvrings designed to undermine a vibrant Hong Kong film culture,” said Joseph Lee, director of the Global Asia Institute at Pace University in New York, who has published two papers on Hong Kong cinema. After decades producing global movie stars like Tony Leung, who starred in Marvel’s “Shang-Chi” blockbuster hit this summer, some in the film industry worry the amendments signal the “death of Hong Kong Cinema,” Lee said.

“It is hard to imagine how film directors, executive producers and actors could stay politically neutral because China’s definition of politics focuses narrowly on any opinion and action thought to be a security threat,” he said.