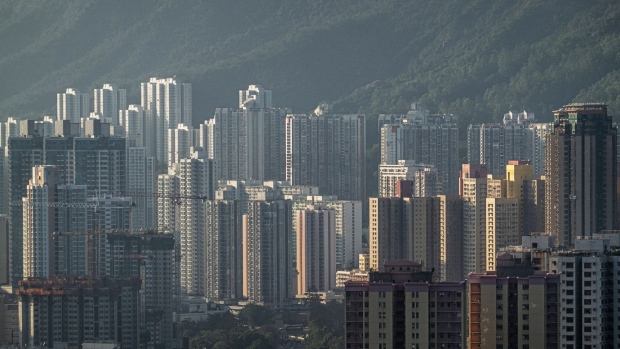 Residential buildings in the Kowloon area in Hong Kong, China, on Thursday, Nov. 4, 2021. With limited space to build, Hong Kong has gained a reputation for having some of the smallest and most expensive apartments anywhere in the world. Photographer: Lam Yik/Bloomberg , Bloomberg

(Bloomberg) -- Chief Executive Carrie Lam announced that Hong Kong would set up a bureau to focus on housing issues, after Beijing directed her government to address the world’s most expensive home prices.

Lam revealed a sweeping restructure of her government as the city’s first “patriots only” legislature opened session Wednesday, and said the changes should take effect when the next chief executive’s term begins. She also fleshed out the flagship housing plan for a so-called Northern Metropolis announced at her annual policy address in October, saying the legislative council should streamline some land regulations to create favorable conditions for the project.

At least 20 lawmakers were not in the chamber, according to HK01, after attending a large birthday party on Jan. 3 with guests who later tested positive for Covid-19. Many participated via video, lawmaker Eunice Yung said on Facebook.

The birthday fiasco threatened to undermine Lam’s narrative that the new legislature represented an “improved” era of stability. After Beijing overhauled the city’s electoral process last year to ensure only those loyal to the ruling Communist Party could run. The 90 lawmakers were installed in a December vote that attracted the financial hub’s lowest ever election turnout.

Lam on Wednesday again touted plans for the new council to revive a controversial security law, known as Article 23, that ignited a political firestorm almost two decades ago. A provision of Hong Kong’s charter drafted before its return to Chinese rule in 1997 requires a law banning “foreign political organization or bodies from conducting political activities,” as well as “treason, secession, sedition, subversion against the Central People’s Government, or theft of state secrets.”