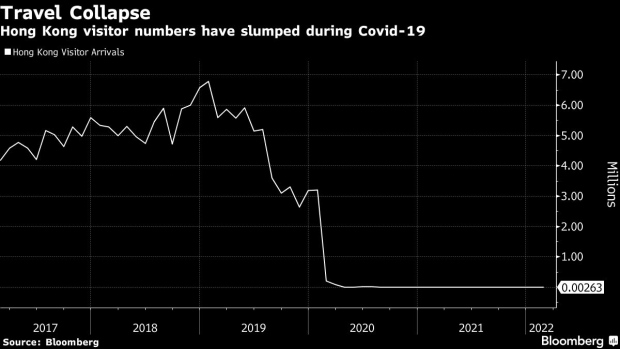 Travelers heading to quarantine in the arrival hall at Hong Kong International Airport in Hong Kong, China, on Friday, April 1, 2022. A ban on flights from nine countries including the U.S. and U.K. is lifted from today and the amount of time travelers spend in mandatory hotel quarantine will be cut in half, provided they test negative, Hong Kong's Chief Executive Carrie Lam said on March 21, unveiling the results of a review of the city's approach to the pandemic. Photographer: Paul Yeung/Bloomberg , Bloomberg

(Bloomberg) -- Hong Kong’s reopening to the rest of the world is being slowed by the government’s bans on airlines for carrying infected passengers, with 11 routes in total suspended as of Monday, the most since a peak in January.

No passenger flights from outside Asia arrived in Hong Kong yesterday, and only one is due Tuesday, operated by Emirates after the Dubai-based airline completes a seventh ban. That will lower the number of simultaneously suspended routes to 10.

Hong Kong suspends routes for seven days if three or more passengers on a flight are found to be infected with Covid-19 upon arrival or travelers don’t have the required documents. More carriers have been affected after flight bans from nine countries were lifted at the start of April and quarantine time was reduced, theoretically making travel to the city a little less arduous.

The flight suspensions have accelerated to effectively one a day, with 20 doled out since the start of April. There have been 68 route bans this year, already exceeding the 51 in total from 2021, when Hong Kong imposed even tighter rules on travel and quarantine. The suspensions for carrying infected passengers were halved to seven days on April 1.

The policy has added an extra layer of complication to travel plans, as airline routes can be severed at short notice, giving passengers little chance to rearrange itineraries. Some travelers are booking more than one flight so they have a backup option if a trip falls through.

Hong Kong’s slowness in reopening could be a boost to rival hubs such as Singapore and Seoul. Korean Air Lines Co. Chief Executive Officer Walter Cho told the Financial Times his airline is benefiting from the situation, even as he criticized the South Korean government for opening too slowly.

“A lot of people are actually avoiding Hong Kong now,” Cho said in an interview with the newspaper published Tuesday.

Singapore aims to be Asia’s busiest aviation hub as the city-state accelerates reopening. Singapore Airlines said Monday it expects to operate 61% of its pre-pandemic capacity by May. Hong Kong’s Cathay Pacific is stuck at about 2%.