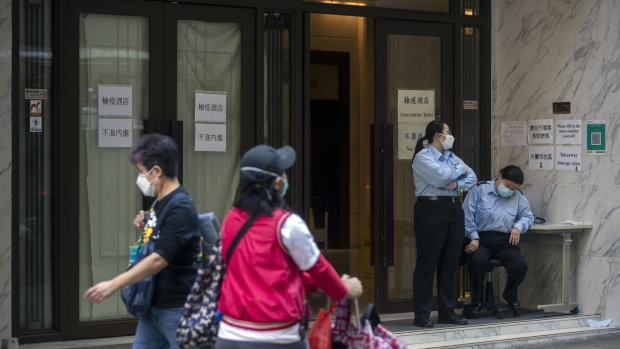 Security officers outside a quarantine hotel in Hong Kong, China, on Tuesday, March 1, 2022. Hong Kong is planning to enforce a lockdown to ensure a mandatory Covid-19 testing drive planned for this month is effective, Sing Tao Daily and other domestic media reported Tuesday, as the worst virus outbreak in the city so far continues to snowball. , Bloomberg

(Bloomberg) -- Hong Kong will probably keep mandatory hotel quarantine requirements for incoming travelers until at least the end of June, its outgoing leader said, despite business leaders’ growing calls to join the rest of the world in opening up.

“It’s very unlikely that during my term there would be more relaxations on the border controls,” she said. “In other words, we will still have the hotel quarantine. We will still require vaccination before a passenger can board a plane to Hong Kong and we will still impose the test and hold, whether at the airport or at a hotel, for a PCR test, in order to keep Hong Kong safe.”

Lam’s term expires at the end of next month, clearing the way for former Chief Secretary John Lee to be installed as leader on July 1 -- the 25th anniversary of the city’s handover from British to Chinese rule.

Hong Kong is under pressure from the city’s business community and foreign airlines to drop its notorious mandatory hotel quarantine for incoming vaccinated travelers -- a policy that’s isolated the financial hub and been criticized as ineffective after failing to keep out the omicron variant.

While tight border controls have left Hong Kong lagging, the city has drifted in recent months from President Xi Jinping’s punishing Covid Zero policy that strives to eliminate all community infection and has plunged mainland cities into lockdown.