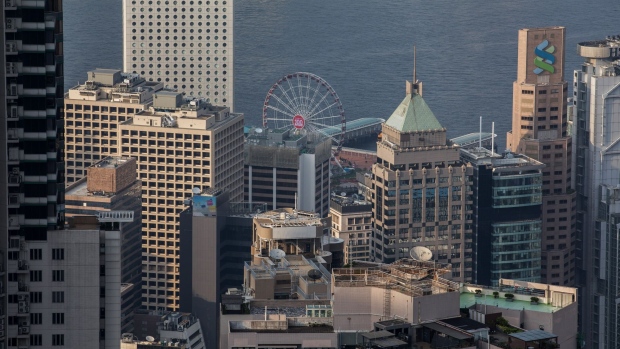 Buildings in the Central district are seen from Victoria Peak in Hong Kong, China, on Wednesday, Aug. 28, 2019. Hong Kong's hotel industry is struggling with a collapse in bookings after thousands of protesters shut down flights from the territory's airport in an escalation of months of clashes with police. Photographer: Paul Yeung/Bloomberg , Bloomberg

(Bloomberg) -- Hong Kong banks will be obliged to report disclosures on clients suspected of violating the national security law imposed on the financial hub by Chinese authorities last year that has led to more than a hundred arrests and key civil society groups to disband.

The new directives were updated on Oct. 22 in a document developed by The Hong Kong Association of Banks with “input” from The Hong Kong Monetary Authority.

Lenders operating in the city will need to report clients who they know or suspect are committing offenses related to national security or financing or assisting such violations, according to the document. Suspicious transactions need to be filed to the city’s Joint Financial Intelligence Unit.

After sometimes violent protests rocked the city in 2019, Chinese lawmakers in June last year imposed a sweeping law on the city to crackdown on dissent. Lenders in the city such as HSBC Holdings Plc have already been caught up in the turmoil, drawing wide criticism in the U.S. and U.K. for freezing or closing bank accounts seen as related to the protests.

According to the terms, “non-exhaustive” situations that could trigger an obligation to disclose include when a bank is aware that a person has been arrested or charged with an offense that endangers national security or when police inform them of a “offence related property.”

Lenders have also closed accounts of top local and Chinese officials, including Chief Executive Carrie Lam, after the U.S. imposed sanctions on a number of people seen as involved in crafting and implementing the security law on the former British colony. China has also been planning to implement an anti-sanctions law in Hong Kong, further alarming banks and businesses, but that was shelved earlier this month.