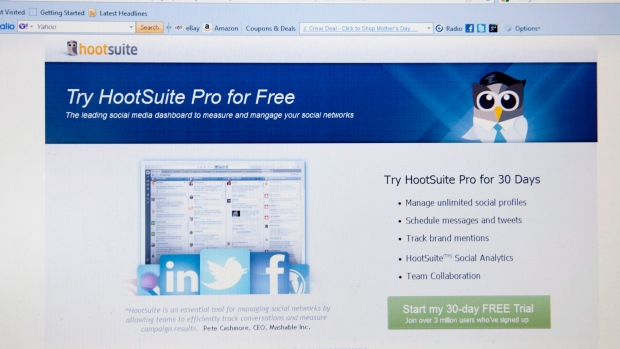 The Hootsuite home page is seen on a computer screen in Vancouver Friday, May 11, 2012. , The Canadian Press

Hootsuite Inc., a Canadian startup that builds software to help marketers use social media, is said to be for sale.

The Vancouver-based company, which has been an anchor of that city’s tech scene for years, has hired Goldman Sachs Group Inc. to explore a sale at a valuation of at least US$750 million, a person familiar with the deal said. The company could still opt to go public instead of selling itself, said the person, who asked not to be identified because the process is private. Reuters reported the potential sale on Thursday.

Hootsuite shot to prominence over the last five years as one of the early success stories of the recent wave of Canadian tech startups to gain international attention. The company raised venture funding in 2014 at a valuation of about US$750 million, with investors including Fidelity Investments. But while fellow Canadian tech darling Shopify Inc. went public and continued to expand rapidly, Hootsuite had to cut staff and focus on being cash flow positive instead of pouring fuel into revenue growth.