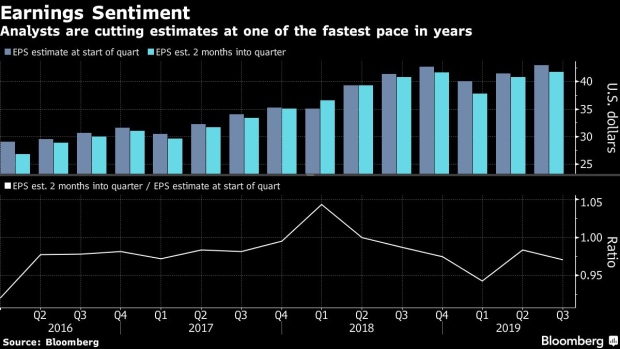 A pedestrian passes in front of a tube releasing a cloud of steam near the New York Stock Exchange (NYSE) in New York, U.S., on Monday, Jan. 7, 2019. , Bloomberg

(Bloomberg) -- Wall Street analysts are slashing projections for fourth-quarter earnings at a furious pace, making it more likely that a profit recession will hit Corporate America for the first time in almost four years.

Two months into the quarter, analysts have shaved 4% off their estimates to $41.12 a share, a drop of almost 1% compared with a year ago after a 1.3% decline last quarter. While they almost always lower expectations as a period progresses the current pace has been exceeded only twice since 2015.

Bulls say the hand wringing over stagnant profits is overdone, with the S&P 500 up almost 25% this year on easy Federal Reserve policy and a trade truce with China. But part of the optimism has been predicated on an anticipated rebound in earnings, which keeps getting delayed. For now, it’ll be well into 2020 before profits rise meaningfully, with analysts predicting a 9.2% gain for the year.

And even that is too optimistic, according to Mike Wilson, Morgan Stanley’s head of U.S. equity strategy. The firm’s earnings model that correctly predicted this year’s flat growth is again painting a bleak picture. The model, which incorporates leading indicators such as consumer confidence, manufacturing data, the U.S. dollar and credit spreads, suggests profits won’t budge over the next 12 months.

“The drivers of flat earnings growth in 2019 tell us a 2020 rebound in growth is unlikely,” Wilson wrote in a note to clients. “It would require a material exogenous positive shock to change this trajectory.”

Despite anemic earnings, stocks are on course for one of their best years during the bull market, leaving the equity benchmark somewhat expensive compared the earnings of its members. At 17.7 times forecast profits, the S&P 500 trades at a multiple that’s higher than any time in the past decade except for late 2017 into early 2018.

Bulls have shrugged off the rising valuations, noting that predictions for earnings growth will buttress more price gains. But the rebound keeps getting delayed. Eight months ago, analysts projected fourth-quarter profits would jump more than 9% after falling in the first few months of the year. They now see contraction for this quarter and don’t expect a return to 10% growth until the second half of 2020.

While profit expectations haven’t collapsed, the prolonged stagnation is likely to create market volatility as traders battle with two conflicting scenarios: recovery or slowdown. The S&P 500 has fallen in five of the past nine sessions amid growing angst over trade and growth. It’s a departure from the previous 1 1/2 months, when the index enjoyed a 29-day stretch without back-to-back losses.

“The New Year will need to deliver the goods with more than a modicum of ink on said Phase One trade agreement, along with continued economic resilience and some improvement in revenues and earnings growth at the corporate level,” said John Stoltzfus, chief investment strategist at Oppenheimer Asset Management. “We don’t look for ‘the good stuff’ to be given investors without some testing of their convictions but expect it will be earned as patience gets tried.”

Stocks took a negative hit Monday, with disappointing factory data and renewed concern over trade sending the S&P 500 lower by as much as 1%.

“It will be a tough few days for equities until this clears up,” said Dennis DeBusschere, head of portfolio strategy at Evercore ISI. “But if Trump keeps highlighting equity market strength as a reason to be tough on China, the market will do what it has done all year -- go down to change his mind again.”