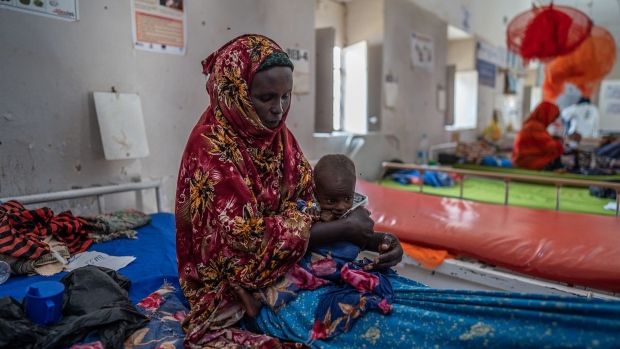 The grim reality confronting drought-stricken east Africa is a frightening portent of what could come elsewhere as the effects of climate change become increasingly pronounced. Across the world’s poorest continent, more than a fifth of its 1.3 billion people don’t have enough to eat, with water shortages and extreme weather events the main culprits.

Nowhere is this phenomenon more stark than in Somalia, one of the world’s most climate-vulnerable countries, which is in the grip if its worst drought in more than four decades while simultaneously struggling to contain an Islamist insurgency. Almost half of its 17 million people are in urgent need of aid and more than 1 million have abandoned their homes in search of food and grazing. Rains have failed for five consecutive seasons and water shortages are even worse that in the early 1990s when a famine claimed about 260,000 lives.

In the face of growing evidence linking extreme weather events — from droughts, floods and ever-stronger storms — to rising global temperatures, delegates from about 200 nations attending the COP27 climate summit in Sharm El-Sheikh, Egypt, in October reaffirmed commitments to contain future temperature increases to 1.5 degrees Celsius. But their failure to agree on new steps to meet that target or on the need to phase down the use of all fossil fuels means there’s no end in sight to the plight of Somalians like Nimo Hassar.

Hasser lost five of her 10 children — Mohammed, Fahro, Nouro, Habiba and Abshiro — to starvation and disease within the past year after the drought wiped out most of her family’s goat herd, its main source of income.

When her youngest child, seven-month-old Abdi Kadir, came down with a fever and started throwing up, Hasser sold two of her remaining animals to pay for the journey from their village of Bud Bud in central Somalia to the town of Galkayo 150 kilometers (93-miles) to the north. The child arrived at the dust-swept town’s hospital last month weighing just 3.4 kilograms (7.7 pounds), the same as a typical newborn.

“When I brought him here his condition was terrible. He was vomiting a lot,” said Hassar, 30, as she sat on a bed with her son swaddled in a flowery shawl. Within days of starting treatment, Kadir turned a corner and began picking up weight.

Official data shows that more than 900 other children under the age of five have died across Somalia since January. The true tally is unknown — and likely exponentially higher — because vast areas are under the control of al-Shabaab insurgents and inaccessible to officials and aid workers. In the area surrounding Galkayo, 550 kilometres northwest of the capital Mogadishu, more than half the children are already considered malnourished. Countrywide, more than 350,000 Somalian children have been treated for the condition this year, and the United Nations anticipates that their number will swell to 1.5 million by the end of this month. Read more: Why East Africa Is Facing Its Worst Famine in Decades: QuickTake

About $1.2 billion of aid, the bulk of it from the US, has flowed into Somalia but that’s $1 billion short of what’s needed for the 7.6 million people who need help, according to the UN Office for the Coordination of Humanitarian Affairs.  The UN has said it expects a famine to be declared soon in three isolated regions of the country. The classification is assigned to areas where at least a fifth of households face an extreme lack of food, at least 30% of children suffer from acute malnutrition and at least two out of every 10,000 people die daily from starvation or a combination of hunger and disease.

The government has so far steered clear of taking that step, fearing it will be interpreted as its failure to provide for the basic needs of its people and used to undermine its fragile hold on power.

“The technical facts do not call for a famine announcement at this time,” Ali Omar, Somalia’s state foreign minister, said in an interview. “The UN thinks if they announce a famine they will get more funds.”

Even if more money were made available, distributing aid to all those who need it would be impossible given ongoing the conflict with al-Shabaab. The group has been trying to topple the government since 2006 and impose its own version of Islamic law, and has taken full advantage of the drought to recruit fighters from desperate families.

A military offensive has freed a large swathe of territory from the al-Qaeda-linked group’s control over recent months but it still has several strongholds in central and southern Somalia and maintains a presence just 30 kilometers outside Mogadishu. Aid workers travel in armored vehicles and giant walls line the city’s streets to protect key infrastructure against bomb attacks.

“With al-Shabaab controlling a large chunk of the rural areas of the south, it is exacerbating the situation,” Hussein Moallin, President Hassan Sheikh Mohamud’s national security adviser, said in an interview. “People are leaving those areas and moving towards the larger towns controlled by the government.”

Galkayo is one such town. More than 100,000 people who’ve been displaced by the fighting and drought have taken up residence in about 70 separate camps in the area, living in shelters made of cardboard, wood and corrugated metal sheets and surviving on handouts. Others have leased space near aid distribution points.

At the Xaarxaar camp, Saadia Hirsi Aden, 32, recounted how she fled her village in the Lower Shabelle region after al-Shabaab seized control of the area in mid-November, cutting off aid to drought-affected households.

“I was one of the lucky ones,” she said, as she cradled her two-month-old son. “There were many who died from starvation and could not flee because they were too weak.”

More than a dozen other women interviewed in the camps, some of whom had walked for weeks to get there, told of neighbors, friends or relatives dying due to a lack of food and water in rural areas or being killed in the fighting. Some of the women said the economic pressures on their families had cost them their marriages, while others reported an increase in gender-based violence, sexual crimes and child marriages.

“There are a lot of people seeking support,” said Zamzam Abshir, a child protection officer at the Galkayo Education Center for Peace and Development, which provides shelter and education for hundreds of displaced women. “It’s quite overwhelming.”

Ali Abdulla Roble, one of four bearded village elders who kept watch over the growing numbers of refugees at the Somaliwaayn refugee camp, said he had gone to visit his aged mother in central Somalia and returned to Galkayo along with eight desperate families.

“This is only going to continue,” he said. “The drought is persistent and the conflict is getting out of hand.”

--With assistance from Chris Miller, Brian E Wall and Lucia HE.