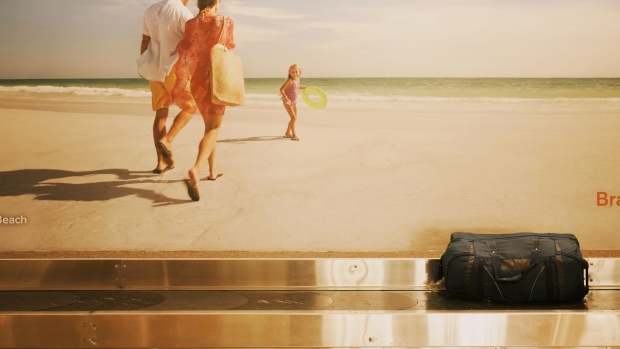 Luggage moves down a carousal at the baggage claims area of Sarasota Bradenton International Airport (SRQ) in Sarasota, Florida, U.S., on Wednesday, Sept. 29, 2021. Airline losses from the coronavirus pandemic are set to surpass $200 billion as travel curbs weigh on corporate and long-haul demand well into 2022, according to the industry’s main lobby. Photographer: Zack Wittman/Bloomberg , Bloomberg

(Bloomberg) -- Hotel platform Selina has reached a deal to go public through a merger with blank-check company Boa Acquisition Corp., according to people with knowledge of the matter.

The combined company will be valued at $1.2 billion, the people said, asking not to be identified discussing private information. The transaction includes a $70 million equity placement from South Light Capital, MORE Investment House and Ronald Cohen, co-founder of Apax Partners, the people said.

The agreement is expected to be announced as soon as Thursday, the people said.

Founded by Rafael Museri and Daniel Rudasevski, London-based Selina targets Generation Z and Millennial travelers. It operates vacation rentals as well as co-working spaces in what it calls “buildings with character,” according to its website, which also advertises wellness and other events that are hosted at its locations.

The company targets non-traditional travel destinations picked by locals. In addition to the U.K. and U.S., countries with Selina locations include Portugal, Mexico, Costa Rica, Colombia, Panama and Brazil, among others, its website shows.

Boa raised $230 million in its February initial public offering. It had a mandate to find businesses that provide technology solutions to the real estate industry, the special purpose acquisition company said in its listing document.

The combined company will operate as Selina Hospitality Plc, with its shares listed on the New York Stock Exchange under the symbol SLNA, the people said.