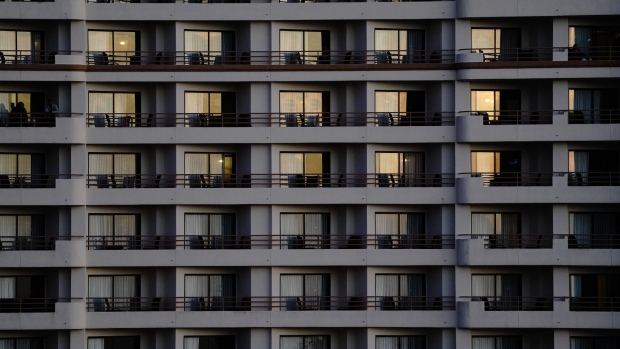 Hotel room balconies at the Waterfront Beach Resort in Huntington Beach, California, U.S., on Saturday, Dec. 12, 2020. California's average rate of positive tests over 14 days reached 8.8%, the highest since the spring as cases surged to another record. Photographer: Bing Guan/Bloomberg , Bloomberg

(Bloomberg) -- The hotel industry has a new idea to get Americans to return: offer their locations as vaccine distribution sites.

The American Hotel and Lodging Association, a trade group that represents hotels such as Marriott International Inc. and Red Roof Inn as well as vendors and suppliers, sent a letter Thursday to the Biden-Harris transition team asking that their buildings be considered as an option as states decide where to administer shots.

Chip Rogers, chief executive officer of the group, points out that there are more than 50,000 hotels in the U.S., sporting private rooms, refrigeration capabilities and 24-hour operations. “As you know, administering the vaccine on a national level will be a significant undertaking requiring innovative solutions and collaboration,” he said in the letter, copies of which were also distributed to the National Governors Association and Operation Warp Speed.

The pandemic has battered the lodging industry, keeping tourists and business travelers home and forcing properties to close for months. U.S. hotels are currently running at less than 50% occupancy, Rogers said -- meaning there’s plenty of space.