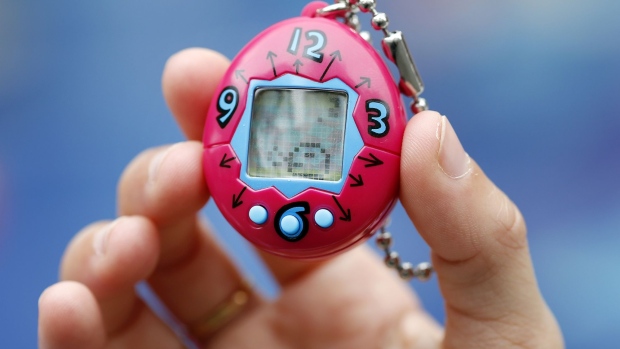 PARIS, FRANCE - OCTOBER 25: A child shows a "Tamagotchi" electronic pet on October 25, 2017 in Paris, France. Tamagotchi is a virtual electronic animal which means "cute little egg" and simulates the life of an animal. Twenty years after its creation, the Japanese company Bandai reissues the famous limited edition toy that is available today in France. Tamagotchi will be available in the United States on November 5, 2017. , Photographer: Chesnot/Getty Images

(Bloomberg) -- The most popular toys for kids this holiday season, from nostalgic favorites to cheap items popularized by TikTok, may sell out much sooner as a result of global supply-chain hangups.

A lack of workers in China, container shortages and bottlenecks getting containers onto ships are all contributing to shortages, toy industry experts say. That may make it harder, or pricier, for parents to do their holiday shopping.

Supplies are almost certain to be thin by Black Friday, the busy shopping day after the U.S. Thanksgiving holiday. Among the items expected to be hot this year are Tamagotchi virtual pets, a “learning robot” from Mattel Inc.’s Fisher-Price and a play kitchen bearing the logo for the children’s cartoon Blue’s Clues, according to lists compiled by industry publications Toy Insider and Toys, Tots, Pets & More.

“Things are just stuck at ports, and they’re taking another couple of weeks,” said Marissa Silva, editor-in-chief of the Toy Insider.

Besides coping with supply chain hangups, the toy industry is also dealing with extraordinary demand. Sales grew 15% in the first half of 2021 to $22.5 billion from a year earlier, according to researcher NPD. That’s on top of surging growth last year, when parents with kids stuck inside during the pandemic turned to at-home entertainment.

Large companies, such as Hasbro Inc., have had to secure contracts with new ports and vessels to bring in shipments from China, where about half of its products are made, Chief Executive Officer Brian Goldner has said on earnings calls. The company also manufactures toys in Vietnam, India and Ireland, among other places. The difficulties led Hasbro to raise prices this quarter.

Small companies have had to reject some orders from retailers due to shipping difficulties, Silva said. While there’s little risk of bare shelves, parents may find less to choose from, according to Ed Desmond, a spokesman for the Toy Association, a trade group.

“There’s no certainty that if your child or the children in America are looking for a particular toy, that it will be around,” Desmond said at a press conference at the Port of Los Angeles last week.

Other popular items identified by Toy Insider include a Disney-branded, princess-themed “celebration castle,” stuffed plush food toys called Squishmallows and a “magic cauldron” from Moose Toys where kids can perform a “spell” to make a surprise toy come out.

Social media has particularly helped fuel toy popularity, with one item -- a silicon sheet that resembles bubble wrap -- gaining popularity in TikTok videos rather than through traditional advertising.