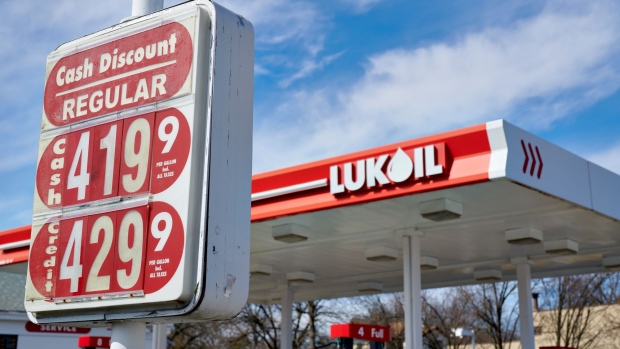 Fuel prices at a LukOil gas station in Bloomfield, New Jersey, U.S., on Sunday, March 13, 2022. The cost for a gallon of gas in the U.S. continues to reach all-time highs, as the national average jumped nearly 7 cents last week. Photographer: Gabby Jones/Bloomberg , Bloomberg

(Bloomberg) -- Investment bank Houlihan Lokey Inc. is working with a group of US bondholders of Lukoil PJSC to negotiate a debt buyback, according to people familiar with the matter.

US holders were excluded from the bond tender offer launched by the Russian oil giant last week, according to the terms seen by Bloomberg. The company is proposing to repurchase all of its $6.3 billion Eurobonds in a move that will save it money and provide holders a way out and avoid potential payment delays due to sanctions.

US holders face tight restrictions in trading Russian securities, but have always been allowed to sell their existing investments.

The group advised by Houlihan Lokey holds more than $800 million of the outstanding notes, according to the people familiar, who asked not to be identified discussing private information. The firm is already in discussions with the oil company and trying to get a better price, the people said. Lukoil is seeking to buy back four of its five outstanding bonds at a discount of more than 20%, Bloomberg reported earlier.

A representative for Houlihan Lokey declined to comment. Lukoil didn’t immediately respond to a request for comment sent outside regular business hours in Russia.