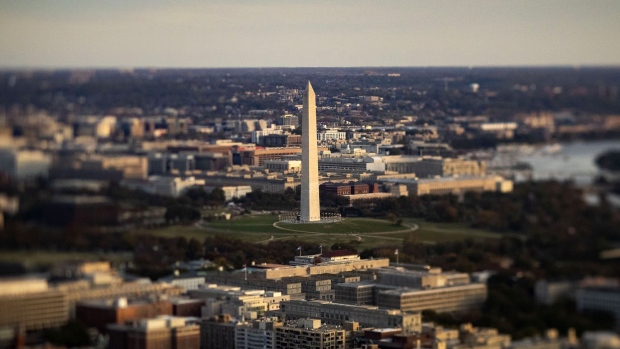 (Bloomberg) -- House Democrats voted Friday for the first time in history to make the U.S. capital of Washington, D.C., a state, a mostly symbolic move that highlights some of the issues of race and equality driving election-year politics.

“My life as a third-generation Washingtonian has marched toward this milestone, mindful that my own family has never known equality,” said bill sponsor Eleanor Holmes Norton, the District of Columbia’s non-voting House delegate and a descendant of slaves.

But the move is strongly opposed by President Donald Trump and the GOP-controlled Senate, largely because Washington’s population is registered 76% Democratic and 6% Republican. Trump has been explicit in opposing statehood because Democrats would almost certainly get two more seats in the closely divided Senate.

Other Republicans have argued that the Constitution’s framers intended the federal capital to be independent of the states in order to resist undue pressure.

The U.S. Supreme Court ruled in 2000 that Washington residents don’t have a constitutional right to have a vote in Congress because the district is not a state.

Norton and other supporters said they are positioning the statehood issue for action in the first 100 days of a possible Joe Biden administration next year. President Barack Obama didn’t make D.C. statehood a priority when Democrats controlled the House and Senate in 2009 and 2010.

“If you look at the polls, and they could change, but as I speak they overwhelmingly favor Democrats taking over the Senate,” Norton told reporters. Even so, passing a statehood bill in the Senate would require a supermajority of 60 votes, which is not foreseen for Democrats, or an end to the filibuster’s 60-vote requirement.

Democrats said the use of federal forces to clear the protesters near the White House spotlighted the district’s lack of voting status for Americans elsewhere and is creating momentum for statehood.

“They don’t even think about that we don’t have U.S. senators or that our congresswoman doesn’t have a vote,” Bowser said. “It certainly never occurred to them that the president could move in the Army to address a local policing matter.”

Supporters sought to link the bill, H.R. 51, to the Black Lives Matter movement, arguing that statehood for a city with close to 50% African American population would help give Black Americans greater representation in the Senate, which currently gives disproportionate sway to White rural voters living in sparsely populated states.

Some Republican opponents argued that Washington should become part of neighboring Maryland, thereby allowing its citizens to have a voting representative in the House without the additional two senators that each state gets.

“If D.C. citizens want to have representation, then cede the land back to Maryland,” North Carolina’s Greg Murphy argued on the floor, calling it more cost-effective than making the district a state.

GOP Senator Tom Cotton of Arkansas, in a lengthy Senate floor speech Thursday, dismissed arguments that Washington has a larger population than either Wyoming or Vermont, arguing that Wyoming deserves to be a state because it is a “well-rounded working-class state.”

“Would you trust Mayor Bowser to keep Washington safe if she were given the powers of a governor? Would you trust Marion Barry?” Cotton said, referring to the current mayor and a deceased former mayor, both African American. Barry was convicted of drug possession in 1990 but was elected again as mayor in 1994.

The White House, in a message recommending a veto, argued that the bill violates the Constitution’s 23rd Amendment, ratified in 1961, which gave Washington residents the right to vote for president by granting presidential electors to the district.

Norton said the new bill would expedite a repeal of the amendment, which she predicted would be the fastest ratification in history as other states move to ensure the district doesn’t wind up with extra votes in the Electoral College.