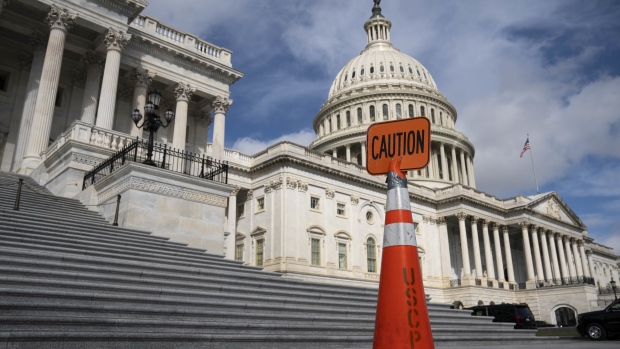 A caution sign outside the U.S. Capitol in Washington, D.C., U.S., on Tuesday, Sept. 21, 2021. House Democrats set up a Tuesday vote on a bill that would suspend the U.S. debt ceiling through December 2022 and temporarily fund the government to avert a shutdown at the end of this month. Photographer: Sarah Silbiger/Bloomberg , Bloomberg

The infrastructure vote will almost certainly come before a vote on a broader tax and spending package, the size and scope of which has been the subject of Democratic discord for the last several weeks.

The timing of the infrastructure vote will appease moderate Democrats who were assured last month that the $550 billion package, which had bipartisan Senate support, would receive a vote by Sept. 27. In exchange, they supported a $3.5 trillion budget outline that served as the starting point for the broader so-called reconciliation package.

Progressive Democrats, however, have maintained they wouldn’t support the infrastructure bill -- which they have the power to defeat -- if the House votes on it before the larger package of social and other programs is passed by the House and Senate.

“I think that may well be the case that it is not ready next week,” House Majority Leader Steny Hoyer said of the reconciliation measure during a Tuesday conference call with reporters.

Pressed about how that schedule will square with progressives, Hoyer did not directly explain.

“We’re going to pass something that can pass the Senate,” Hoyer said in regard to what the larger bill might eventually contain and cost.

Senate moderates Joe Manchin of West Virginia and Kyrsten Sinema of Arizona have said they would not support a package totaling $3.5 trillion. In the evenly divided Senate, Democrats need the entire caucus on board. Manchin has asked for a “strategic pause” on the negotiations.

Hoyer said he believed House Democrats would unite to eventually pass both bills.

“Not a single progressive has told me they would not vote for the infrastructure bill,” Hoyer said.

Progressives have been candid to the media about their plans. On Tuesday, House Progressive Caucus Chair Pramila Jayapal reiterated that there is no scenario in which she can vote for infrastructure next week without reconciliation passing.

“We’re working on it,” she said when asked whether reconciliation could be finished next week.