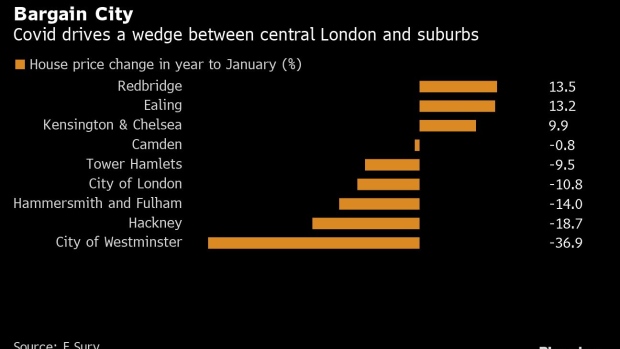 (Bloomberg) -- Living near the office is getting a lot cheaper in London.

House prices in the City of London slumped 10.8% in the year through January, while Tower Hamlets, where rival financial district Canary Wharf is based, saw values drop 9.5%, according to a report by chartered surveyors e.surv. While the rest of the U.K. has enjoyed a housing boom during the pandemic, central London has seen the reverse as sliding rents weigh on prices.

The best bargains are to be found in City of Westminster, the heart of the nation’s government. Prices there tumbled 37% compared with a year earlier -- the sharpest drop seen in the capital.

Rents in some of the wealthiest districts have dived as lockdowns spurred residents to move to greener areas with more space and thousands of migrants to leave London, meaning investors have shied away from central city deals. The resulting house-price dips have occurred even as the government provided a series of support measures, last week extending a homebuyer tax holiday and announcing a low-deposit mortgage program.

“The regions have benefited as city dwellers have opted to embrace working from home with far less commuting,” said Richard Sexton, director at e.surv. “Lifestyle changes and the stamp duty change have worked together to underpin the price rises of the last year.”

Still, the flight to greener pastures may be slowing. Despite continuing demand in the city’s greener boroughs, Greater London overall and neighboring areas in the country’s East and South East had the lowest regional rates of annual growth over the three months from December to February.

That’s “probably indicating that the movement from inner and central London to the capital’s suburbs has largely run its course,” the report said.

The City of London has a relatively low amount of residential buildings, so price falls may be skewed by a small number of sales. The Docklands area around Canary Wharf, however, has staged a building boom in the past five years, with the construction of luxury apartment towers targeting young finance workers.