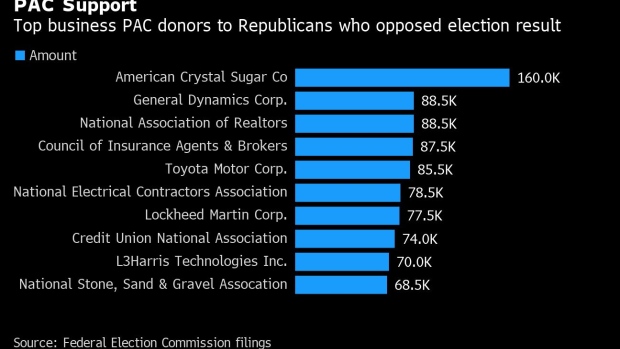 Those Republicans saw a 31% decline in contributions from other committees, including corporate political action committees, in the first half of this year compared to the same period in 2019, the most recent non-election year.

But lobbying groups and companies that depend on government spending revived or maintained their support of lawmakers regardless of any position the recipients had on the 2020 election.

The top donors to the House members who refused to finalize the election for Biden after supporters of then-President Donald Trump stormed the U.S. Capitol were the American Crystal Sugar Company PAC, which gave $160,000,; the General Dynamics Corp. PAC, which donated $88,500, the Council of Insurance Agents & Brokers PAC, which gave $87,500 and the National Association of Realtors PAC, which gave $86,500.

Dozens of businesses and trade associations announced they would pause giving or review of their contribution policies in the wake of the Jan. 6 riot. But many groups have quietly resumed giving, including to the election objectors. Others made no changes to their policies and continued to donate to members who aligned with their interests.

The top 10 largest donors included three defense contractors whose business is based on government contracts. Lockheed Martin Corp. announced a suspension in giving but resumed in April. General Dynamics never said it would stop its donations. L3Harris Technologies Inc. declined to comment on its PAC’s policies. FEC records show it began giving on March 18.

Financed by voluntary donations from company employees, corporate PACs generally give to both Republicans and Democrats when it benefits the company’s regulatory agenda. General Dynamics said in its most recent corporate sustainability report that it “participates in the U.S. political process when it is in the best interests of shareholders, businesses and employees to do so.”

The defense giant tied for second with $85,500 in PAC contributions. Lockheed Martin gave $77,500 and L3Harris Technologies gave $70,000. Representative Ken Calvert of California, the top Republican on the Defense Appropriations Subcommittee, received contributions from all three, totaling $22,000, the most received by any of the objectors.

“Our PAC program will continue to observe the long-standing principles of non-partisan political engagement in support of our business interests,” Lockheed Martin said in a statement.

A spokesman for General Dynamics declined to comment, and L3Harris Technologies did not respond to a request for comment.

Unlike lobbying groups and defense contractors, so-called consumer-facing companies have to weigh potential public reaction with their political interests when making donations.

Social media users unleashed harsh criticism of Toyota Motor Corp. after it resumed contributions. The company said it wouldn’t judge members of Congress “solely based on their votes on the electoral certification” and its PAC donated $85,500 to Republicans who voted against ratifying Biden’s win, ranking them fifth.

The automaker’s donations, first reported by Citizens for Responsibility and Ethics in Washington, led to the hashtag, #ToyotaHatesDemocracy. On July 8, the company announced that it would no longer donate to Republicans who objected to Biden’s win.

The PAC for the American Crystal Sugar Company, an agricultural cooperative whose members include beet sugar producers in the Midwest, doled out $160,000 to 31 of the objecting members, including maximum $10,000 contributions to Representatives Kat Cammack of Florida, Michael Cloud of Texas and Tracey Mann of Kansas, all members of the House Agriculture Committee.

Federal programs that benefit American sugar producers include federal loans, import quotas and other mechanisms that support the price of the commodity, according to the Congressional Research Service.

American Crystal, which said in January it would not base its contribution decisions on the certification vote, did not respond to a request for comment.

The National Association of Realtors paused all donations in the wake of the Jan. 6 riots, but resumed donations in April, including to the 147 objectors. It tied with General Dynamics, donating $85,500 to 53 of them. The realtors’ PAC, one of the biggest donors, also gave to Democrats and other Republicans.“This decision will ensure we continue to engage with political candidates to support America’s homeowners and our nation’s real estate industry,” the National Association of Realtors said in a statement.