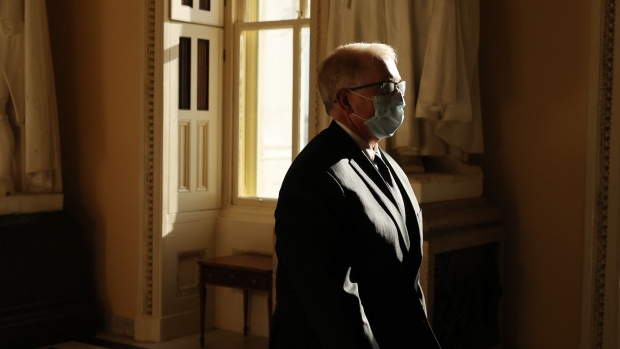 (Bloomberg) -- Congress’ doctor on Tuesday night reimposed a mask-wearing requirement for lawmakers and all others while they are on the House floor, and in hallways and offices.

A previous House-floor mask requirement for members and staff had been lifted last month. But in his updated guidance to lawmakers, Attending Physician Brian Monahan pointed out that the Centers for Disease Control and Prevention is now recommending masks in indoor spaces to reduce risks in response to the further spread of the delta variant of the coronavirus.

“For all House Office buildings, the Hall of the House, and House Committee Meetings, wearing of a well-fitted, medical grade, filtration face mask is required when an individual is in an interior space and other individuals are present,” Monahan said in a memo.

“To be clear, for meetings in an enclosed U.S. House of Representatives controlled space, masks are REQUIRED,” Monahan emphasizes.

In the past 10 days, Representatives Republicans Vern Buchanan of Florida and Clay Higgins of Louisiana, both Republicans, have announced that they have tested positive for the virus. Monahan mentions those cases in his memo, though not by name. In addition, Monahan said several congressional staffers, including some who had already been vaccinated, have also tested positive.

Monahan’s memo, which did refer not to the Senate, says members will not be required to wear masks when they are alone, or when they are recognized to speak on the House floor. But failure to do wear a mask in the Hall of the House in other circumstances will be subject to fines, he writes, as was the case under the previous rule.

On Tuesday night, House Republican leader Kevin McCarthy tweeted: “Make no mistake — The threat of bringing masks back is not a decision based on science, but a decision conjured up by liberal government officials who want to continue to live in a perpetual pandemic state.”

The White House told staff earlier Tuesday that they must again wear masks.