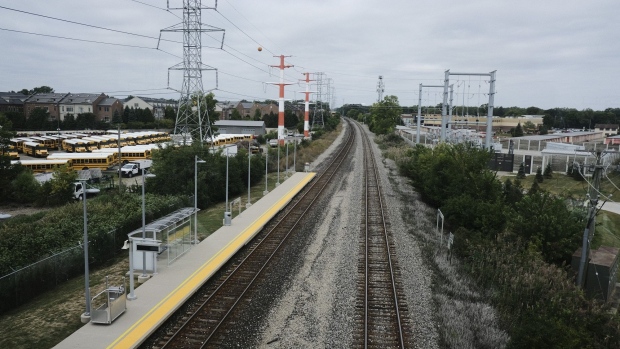 (Bloomberg) -- The House plans to take up legislation on Wednesday to prevent a strike by freight-rail workers, and prospects were brightening for quick action in the Senate despite resistance from a few Republicans and progressive Democrats.

President Joe Biden, who helped broker a deal between railroads and labor that was rejected by members of four of 12 unions, urged Congress to impose the agreement anyway, saying, “The economy’s at risk.”

“It’s not an easy call, but I think we have to do it,” Biden said as he met with Democratic and Republican leaders of the House and Senate on Tuesday. He said he is confident a strike would be avoided.

Speaker Nancy Pelosi said after the meeting that the legislation to impose the tentative agreement reached in September would be put on the House floor by Wednesday morning and that it has the votes to pass. Senate Majority Leader Chuck Schumer said that the chamber’s Republican leader, Mitch McConnell, had agreed try to pass the bill as quickly as possible.

An objection by any senator to fast tracking the measure could push final Senate action until close to the formal strike deadline of Dec. 9.

Number two Senate Republican John Thune told a panel of Bloomberg editors and reporters in Washington that while many Republicans would prefer not to have Congress intervene, a “significant” number would likely vote for the measure if it comes to the Senate floor.

“When push comes to shove, if that’s the only solution there will be I suspect a significant number of Republican votes,” he said.

A work stoppage on freight rail lines would cripple supply chains, wreaking havoc on the US economy. Railroads likely will begin shutting down rail service as soon as the end of this week, beginning with embargoes on accepting hazardous freight, to make sure rail cars aren’t left stranded on the tracks, adding to pressure on Congress to intervene.

Several lawmakers criticized the lack of sick leave for rail workers in the deal, and some said the two sides need to be pushed back into negotiations.

In addition to the vote on Biden’s rail deal on Wednesday, the House will also vote on adding seven days of paid sick leave as a technical correction to the bill. That procedure would allow the Senate to hold a quick up-or-down vote on the sick leave matter and then proceed to debating the underlying legislation if the sick leave change is rejected.

Pelosi told reporters she would vote for sick leave.

Senator Bernie Sanders, a Vermont independent who caucuses with Democrats, said he will demand a vote on an amendment that would provide the benefit. But in a positive sign, he told reporters that he expects that it will be allowed, which could streamline the process in the Senate.

Thune told reporters that he did not think there would be enough Republican votes to pass the Sanders amendment.

Republican Senator Marco Rubio of Florida said Tuesday that unions and the companies should go back to the bargaining table rather than have a settlement imposed by Congress.

“Just because Congress has the authority to impose a heavy-handed solution does not mean we should. It is wrong for the Biden administration, which has failed to fight for workers, to ask Congress to impose a deal the workers themselves have rejected,” he said in a statement. “I will not vote for any deal that does not have the support of the rail workers.”

Of a total of 13 labor agreements among the 12 unions, nine have been ratified and four were struck down by members.

“I can’t in good conscience vote for a bill that doesn’t give rail workers the paid leave they deserve,” Bowman said.

The rail dispute has been a challenge for Biden, who personally intervened in the negotiations and has vowed his administration would be the most pro-union in US history. Asking Congress to intervene, however, puts the president at odds with union workers who voted against the agreement, as well as with pro-labor Democrats.

The Brotherhood of Maintenance of Way Employees Division of the International Brotherhood of Teamsters on Tuesday said it was “deeply disappointed by and disagrees with United States President Joseph R. Biden’s statement, calling upon Congress to pass legislation that would adopt tentative agreements between Railroad Workers and railroads that do not include paid sick days for Railroad Workers.”

White House press secretary Karine Jean-Pierre said Biden advocated for sick leave but that, “The president’s not going to take any action that would undermine the urgent need to avert a harmful rail shutdown.”

“We are in active conversations and contingency planning with our rail customers – including manufacturers and some of the 7,500 retailers we serve,” Humbert said in an email response to questions. “A handful have already chosen to divert away from rail, making that decision earlier than when the last deadline approached in September.”

A strike would also affect passenger rail. Amtrak owns track for only 3% of the 21,400 route-miles it travels and most of that is in the Northeast Corridor, the passenger carrier said on a blog post on its website. That means most passenger-train service will also begin to shut down well ahead of the strike date to avoid stranding riders.

Under the Railway Labor Act, which only applies to rails and airlines, Congress can force a settlement with legislation. Biden has asked Congress to pass a bill that adopts unchanged the deal that Labor Secretary Marty Walsh brokered in September.

The railroads have said they won’t negotiate outside of the framework of a report provided by a Presidential Emergency Board, which consisted of three arbiters, that Biden convened in July to settle the impasse.