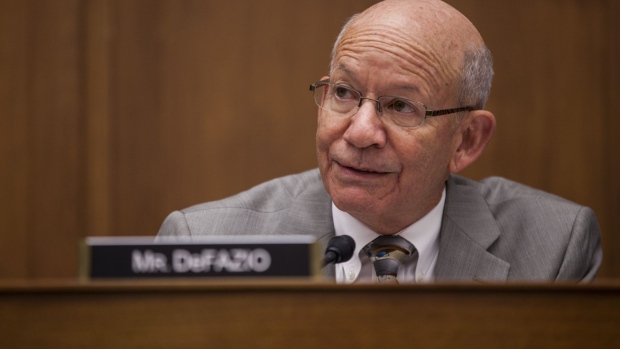 (Bloomberg) -- Democrat Peter DeFazio of Oregon, chair of the House Transportation and Infrastructure Committee, said Wednesday he is retiring and won’t seek re-election to his House seat in 2022 after 36 years in Congress.

“It’s time for me to pass the baton to the next generation so I can focus on my health and well-being,” said DeFazio, 74, in a statement. “It has been the greatest honor of my life to serve as Congressman for the Fourth District of Oregon” and called it a “tough decision.”

DeFazio becomes the 19th incumbent Democrat to decline to run for another term in office in next year’s midterm congressional election and one of several committee chairs or close allies of Speaker Nancy Pelosi to do so. Democrats have a narrow 221-213 majority in the House and historical trends favor a Republican take over after next November’s election.

So far, 11 incumbent House Republicans also have announced they aren’t seeking re-election to retire or run for other office.

Pelosi, in a statement, called DeFazio “a champion of sustainable, smart and green infrastructure, whose progressive values, passion and persistence have helped rebuild America and the middle class.”

She ticked off a list of his legislative successes, including his role in helping pass the bipartisan infrastructure package and legislation to enact President Joe Biden’s economic agenda, which is still awaiting action in the Senate.

DeFazio faced a close and expensive race for re-election in 2020 against GOP challenger Alek Skarlatos a former member of the National Guard who helped thwart a terrorist gunman on a 2015 European train. Skarlatos is a leading contender for the GOP nomination to run again in 2022, though the district has been redrawn to give the Democratic candidate a bigger advantage, according to Oregon Public Broadcasting.

House Budget Committee Chair John Yarmuth, a Kentucky Democrat, and Science, Space and Technology Chair Eddie Bernice Johnson of Texas are among other Democrats who have said they won’t seek re-election in 2022.