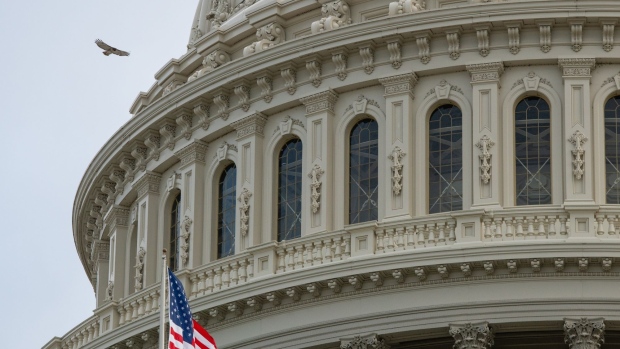 Representative Ro Khanna, a Democrat from California, speaks during a House Oversight and Reform Committee hearing in Washington, D.C., U.S., on Thursday, Oct. 28, 2021. Executives are testifying before the committee investigating allegations that oil giants misled the public about the role of fossil fuels in causing global warming. , Bloomberg

(Bloomberg) -- The House of Representatives unveiled its legislation to bolster U.S. research and development to better compete with China and aid the domestic semiconductor industry, in a bid to negotiate a final bill this year with the Senate.

“Major components of this package have already passed the House with overwhelmingly bipartisan votes, and we look forward to conferencing this bill with the Senate to get legislation to the President’s desk as soon as possible,” House Speaker Nancy Pelosi said in a statement.

The bill is a priority for the Biden administration, particularly the nearly $52 billion in grants and incentives for the semiconductor industry amid a global chip shortage.

Progress had been stalled since the Senate passed its version of the legislation last June. Two House committees approved bills with similar elements but they were not packaged together.

Pelosi and Senate Majority Leader Chuck Schumer announced in November an agreement to work out differences between their two chambers to come up with a single legislative package.

Several Republicans opposed an earlier version of the bill, called the Endless Frontier Act, saying it wasn’t hard enough on China. At the same time, progressive groups, led by People’s Action in a letter last week, warned members against any bill that would “lead to more U.S.-China antagonism.”

“The real question people need to ask themselves is, ‘Do you think it’s a good thing that Intel is putting $20 billion in New Albany, Ohio, and creating 3,000 manufacturing jobs and 7,000 construction jobs,” Khanna said in an interview. “That’s what this bill is about. If you’re for that, then you should vote for this bill. If you’re against that then you should vote against the bill.”

Khanna, a member of the Congressional Progressive Caucus and one of the original sponsors of the Endless Frontier Act, said the legislation seeks to make more technology investments in “middle American and in Black and Brown communities.”

“I believe that overwhelmingly the bill has the support of the Democratic caucus and I think it will have the support of some Republicans,” he added.

Khanna predicted the House would vote on the bill by mid-February. Senator Todd Young, an Indiana Republican, told Punchbowl News earlier Tuesday, that he hoped the bill would pass both houses of Congress by the Memorial Day holiday in late May.