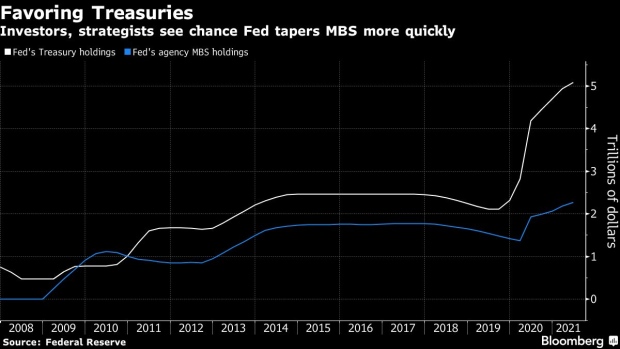 (Bloomberg) -- When the Federal Reserve starts scaling back its massive bond-buying spree, mortgage traders are betting their market will be at the forefront.

That would be a break from the Fed’s balanced approach during its last pullback in 2014, when it slowed purchases of Treasuries and mortgage-backed securities at the same pace. But with housing prices now surging and lending rates not far from record lows, some see a diminishing case for the central bank to keep adding $40 billion of mortgage bonds to its balance sheet each month.

It’s a prospect that’s already making ripples in financial markets as traders seek to get ahead of the Fed’s moves. Mortgage-backed securities lost 0.18% last month even as Treasuries gained, marking the worst underperformance since the pandemic’s early days in January 2020. Last week, Dallas Federal Reserve Bank President Robert Kaplan underscored that view, saying he doesn’t think the housing market needs as much support as it’s getting from the central bank.

“We don’t see problems in the housing market that the Fed should be worried about -- in fact it’s the opposite, with it roaring in certain parts of the country,” said Jake Remley, a senior portfolio manager at Income Research + Management, which oversees $90 billion and is reducing exposure to parts of the mortgage market that would be most affected by a Fed slowdown. “If the Fed is getting worried about inflation and wants to do something, they should pull from mortgages and go more into Treasuries.”

The Fed’s intervention in the housing market has long been controversial, even though it started in 2008 in the wake of the real-estate bubble collapse that weighed on the industry for years. This time around, property values have surged alongside the Fed’s purchases, with a measure of nationwide home prices rising 13% in March from a year earlier, the most since 2005.

To be sure, Fed Chair Jerome Powell has given no indication that central bank would target the mortgage market, nor has he indicated when it will start to taper its debt purchases. But a pullback from mortgage bonds would give officials more bandwith to support the Treasury market -- just as President Joe Biden seeks to enact major spending plans, including a national infrastructure program.

The Fed’s Treasury purchases helped interest payments on the national debt drop over the last fiscal year even as bond issuance surged to fund pandemic relief. And Treasury Secretary Janet Yellen has said low debt-service costs will give the administration space to enact its agenda. The Congressional Budget Office has projected a deficit of $2.3 trillion in fiscal 2021 after hitting more than $3 trillion last year. Those are the biggest deficits, relative to the size of the economy, since World War II.

“The Fed is going to take a different approach this time,” said George Goncalves, head of U.S. macro strategies at Mitsubishi UFJ Financial Group. “It’s going to be modulated. And given the fiscal deficits that we have, it’s the Treasury market” that needs the most support.

In addition to buying mortgages, the Fed has been adding $80 billion of Treasuries to its balance sheet every month. While it has said it will maintain that pace, the minutes of its April meeting reported that a number of participants said it might be appropriate to discuss scaling it back if the economy keeps making “rapid progress.”

Walt Schmidt, head of mortgage strategies at FHN Financial in Chicago, said the Fed could use one of its meetings later this summer -- or the August gathering in Jackson Hole, Wyoming -- to begin talking about its plans for slowing its bond purchases.

The buying since the pandemic has increased the Fed’s mortgage holdings to around $2.2 trillion, far more than during previous rounds of quantitative easing. It has concentrated on newly originated mortgage debt, which helped drive the rate on 30-year fixed-rate loans to a record low of 2.65% in January. Net issuance of agency mortgage-backed securities more than doubled in 2020 from the previous year, reaching $508 billion, the highest since the crest of the housing bubble in 2007.

Yet not everyone is convinced the Fed will pull back from the mortgage market first. While that’s one possible scenario, with it potentially allowing the central bank to focus on Treasuries, it’s unlikely to happen, says Alex Roever, head of U.S. rates strategy at JPMorgan Chase & Co. He said the most cautious approach would be for the Fed to follow its 2014 model.

“That’s the path we think they are most likely to go down because it’s the simplest to communicate and it doesn’t necessarily have any unintended consequences,” Roever said.

“There is a debate over the composition of the balance sheet irrespective of the state of the housing market,” said former Fed Governor Randall Kroszner, who is now a professor at the University of Chicago Booth School of Business. “I think the potential for the Fed to pull back faster from mortgage-backed securities than Treasury securities is on the table.”