Canada’s economy continued its recovery from pandemic damage in the first quarter, driven by a surge in home construction.

Gross domestic product expanded at a 5.6 per cent annualized rate in the three-month period, after a revised 9.3 per cent pace at the end of last year, according to a report Tuesday from Statistics Canada. That’s slightly below the 6.8 per cent median forecast in a Bloomberg survey of economists. Housing investment grew at an annualized 43 per cent pace, easily the biggest driver of growth.

The data show housing is helping the country’s economy power through restrictions meant to curb the spread of COVID-19, providing some resiliency to the rebound. One reason for optimism is the economy has been recovering with little support from consumers and businesses, who have held off from spending over the winter months amid the curbs on activity. 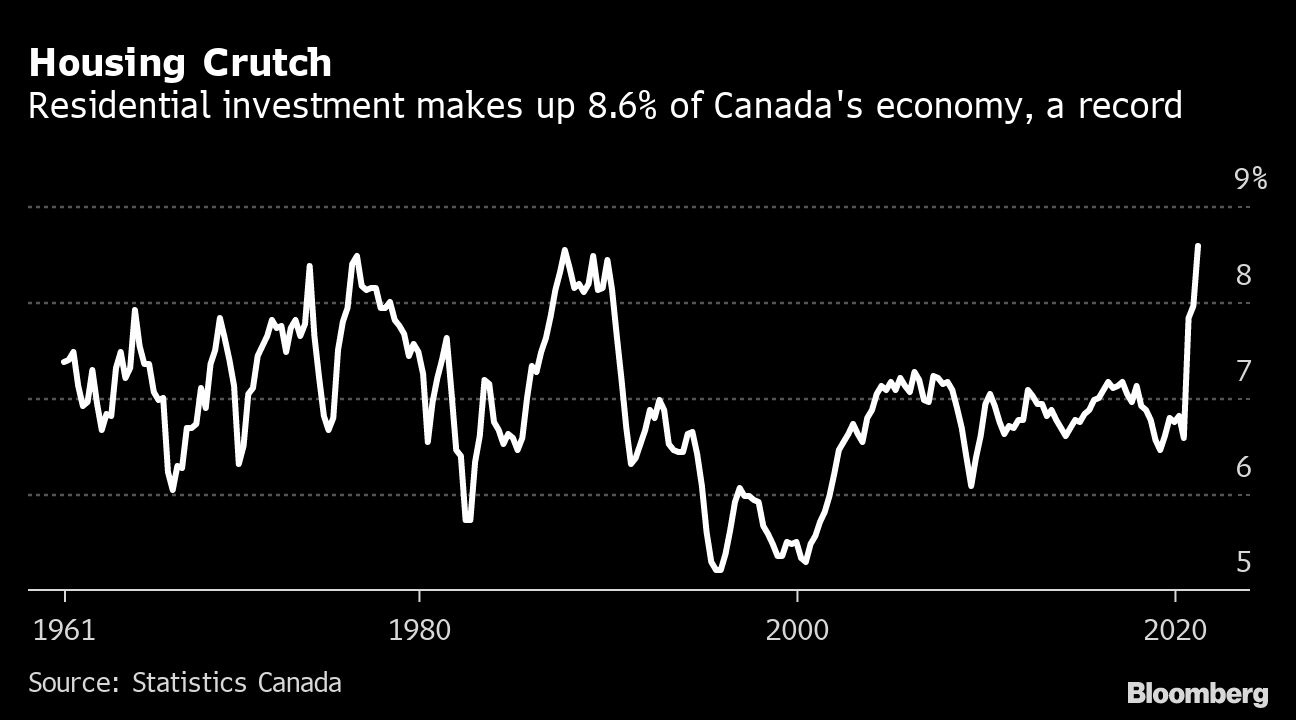 In total, the gains bring the economy closer to a full recovery. Economic activity at the start of the year was 1.7 per cent below what it was at the end of 2019.

The Canadian dollar was little changed after the report, up 0.3 per cent to 1.2032 per U.S. dollar. For the month of March alone, the economy expanded 1.1 per cent, versus a 1 per cent gain expected by economists.

The boom in housing brought residential investment to 8.6 per cent of GDP -- the highest in records to 1961. Low mortgage rates combined with more time spent at home during COVID-19 have spurred demand for houses and increased construction, renovations and resales.

Businesses pared back their capital spending and investments in inventories, which was the biggest drag on growth in the first quarter.

The recovery did stall in April amid a new wave of lockdowns, according to preliminary estimates also released on Tuesday. Output contracted 0.8 per cent on the month, and economists expect another weak reading for May after the country’s largest provinces shut down parts of their economies to combat the virus.

But economists are anticipating the pace of growth will return to above 6 per cent in the second half of 2021 as restrictions are eased amid higher vaccination rates, leading to a return in services that have been closed for months.

Adding to the tailwinds are rising commodity prices. Data released Tuesday show a rally in raw materials drove up incomes at the beginning of the year, which bodes well for future growth. Including inflation, GDP has already surpassed pre-pandemic levels.

The potential for a sharp rebound is already prompting the Bank of Canada to start paring back its stimulus and warning of higher interest rates. Economists are anticipating a healthy 6.2 per cent expansion for all of 2021, only slightly behind a U.S. recovery projected at 6.5 per cent.