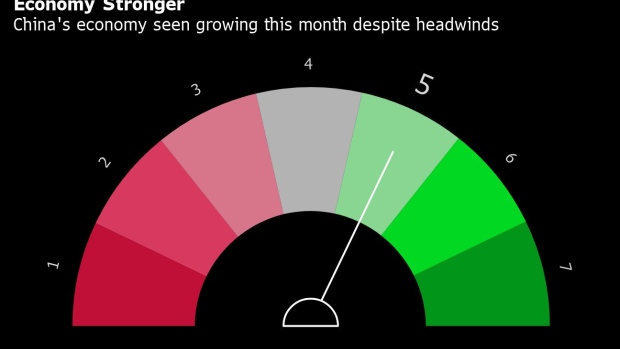 (Bloomberg) -- China’s economy had little to cheer about at the start of the year, with the housing market and private consumption weakening in January and business confidence and stocks tumbling.

That’s the outlook from Bloomberg’s aggregate index of eight early indicators for this month. While the overall value stayed unchanged -- indicating the economy is still improving at a stable pace after expanding 8.1% in 2021 -- there were mixed signals from some of the real-time economic data.

Exports were the bright spot for the economy as it had been for the whole of 2021, with growth underpinned by strong overseas demand for Chinese-made goods. South Korean exports -- a bellwether for global trade -- likely recorded another double-digit gain in January.

The timing of the Lunar New Year holiday, which starts on the last day of this month, will probably also benefit trade as exporters look to move as many goods as they can out the door and onto ships before shutting down for the week-long break.

Small business sentiment continues to struggle though, with new orders suffering a big drop in the month, according to Standard Chartered Plc’s survey of more than 500 smaller firms. The overall index was at the lowest level in almost a year, even though interest rate cuts by the central bank have eased credit conditions.

The survey results suggest “a broad-based moderation in demand and weaker performance in the pandemic-sensitive services sector,” Hunter Chan and Ding Shuang, Standard Chartered’s economists who conducted the research, wrote in a report. “Both domestically focused and export-oriented SMEs reported softer performance.”

The government and central bank have promised to continue to add stimulus to support the economy and keep growth stable, but the ongoing slump in the real-estate market is weighing on people’s willingness to buy homes. House sales dropped for a fifth month in January in the four largest cities, as some property developers defaulted on their debt and looked to sell off assets.

The Lunar New Year holiday period is usually a good period for homes sales, as people return to their home towns and have time to look at property. Housing companies will likely be looking for a bump in sales over the next few weeks. Car sales also fell in the first two weeks of this year, after a rebound in 2021.

Iron rebar stocks increased slightly and steel production dropped this month from a year earlier as some mills in northern China shut to improve Beijing’s air quality ahead of the Olympics, which start early February. Iron ore futures have been rising since November, pushed up by expectations that China’s focus on growth and economic stability will mean more demand for steel.

The stock market slumped so far in January, with the benchmark down almost 5% this year and losing almost a fifth of its value since a peak last February. The tech and property sectors, which have been the targets of stricter government regulation, were among the hardest hit, although state media this week called for investors to hold their nerves in a global selloff.