VANCOUVER -- On the heels of his narrow victory in Vancouver's dramatic mayoral race, observers say Kennedy Stewart's biggest challenge will be leading a council fractured across party lines as he tries to deliver platform promises like increasing housing supply.

The former NDP MP, who ran as an Independent, will lead 10 councillors divided across four parties with an even split between progressives and members of the right-leaning Non-Partisan Association.

Vancouver is one of the few cities in Canada that operates on a party system.

"We're going to need a new civic engineer who knows how to build bridges and not walls," said Andy Yan, director of the City Program at Simon Fraser University.

That could mean making strategic compromises and more open dialogue in council chambers instead of behind caucus doors, he said.

While Kennedy's platform included a subway line extension and new approaches to fighting the opioid crisis, his primary campaign focus has been clear: Housing. Among his plans on the file are immediately hiring a renters' advocate and increasing supply by 85,000 new units, including 25,000 non-profit rentals, over 10 years.

Following his victory, Kennedy told reporters he wants the conversation to move beyond housing by the end of his four-year term. He said he's confident he can do so by working with all members of council.

"I've been talking with them all the way through, all the way through this race and I think there are ideas we share in common and we're just going to have to go policy by policy and make sure we're not alienating anyone. I'm confident we can do it," Stewart told reporters following his victory speech. 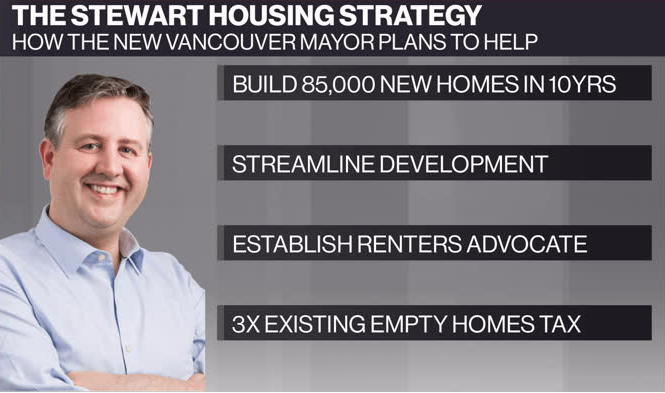 "He may be astute enough to be able to produce some initiatives on the housing front," Smith said, adding that will require building alliances.   Stewart edged out contender Ken Sim of the NPA to win the election with a lead of fewer than 1,000 votes in the race to replace outgoing Mayor Gregor Robertson, who did not run for re-election.

Robertson's party Vision Vancouver entered the race weak, with its mayoral candidate Ian Campbell bowing out days before the nomination deadline. It won no seats on council.

Smith said it all but marks the end of the party after 10 years in power.

"It's the old adage, never say never in politics. But we're going to say a very strong maybe," Smith said.

"It's in one way a Green sweep in Vancouver. I think it also reflects values. At the core of it, Vancouver still acknowledges the importance of sustainability," he said, even if voters disagreed with Vision's strategy for achieving it.

Sim has not conceded the election, saying after results came in early Sunday morning that more votes needed to be counted and he would seek advice in the coming days.

The NPA did not immediately respond to requests for comment Sunday afternoon.