Canada’s increasing reliance on housing activity as an engine of economic growth has one money manager looking for value elsewhere.

Fidelity Investments Portfolio Manager David Wolf said any shocks to Canada’s red-hot housing markets could create a ripple effect throughout the economy, depressing asset values across the board. He’s tilting away from Canada in his portfolio, citing concerns residential investment is becoming too big a chunk of the country’s GDP.

“Housing is becoming a dominant player in GDP in a way that is dangerous,” Wolf said in an interview Thursday, noting Spain, Ireland and Greece had housing-dependent economies just before the financial crisis.

“These turned out to be epic housing bubbles that led to severe recessions.” 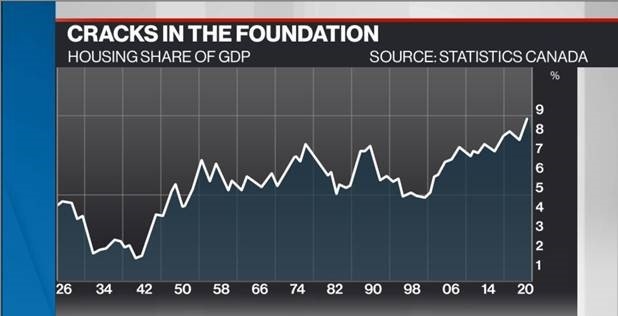 Wolf said a solution would be to jack up property taxes and make them deductible against other taxes to target foreign homebuyers.

In this way, he said, the government would collect much-needed revenue and support the Canadian economy in a way hiking rates would not.

“If you try to cool the housing market using interest rates, you’re going to hit a lot of other things and hurt an already heavily-indebted economy.”