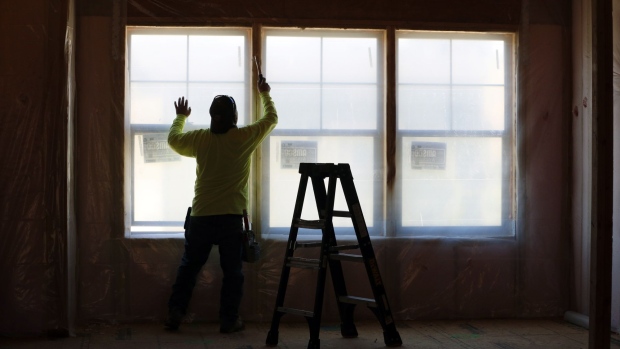 A contractor installs wall insulation in a home under construction in Park City, Utah on Aug. 14. Photographer: George Frey/Bloomberg , Bloomberg

U.S. home construction starts increased in July by more than forecast and applications to build surged by the most in three decades, indicating builders are responding to robust housing demand fueled by record-low interest rates.

Residential starts jumped by 22.6 per cent, the most since October 2016, to a 1.5 million annualized rate from a month earlier, according to a government report released Tuesday. That compared with the median forecast in a Bloomberg survey of 1.25 million and followed an upwardly revised 1.22 million in June.

Applications to build, a proxy for future construction, increased 18.8 per cent, the most since January 1990. The 1.5 million rate of permits topped the median estimate for 1.33 million and is now above the February pre-pandemic rate. An S&P homebuilders index rose in early trade, while the broader S&P 500 also improved on optimism about the economy. 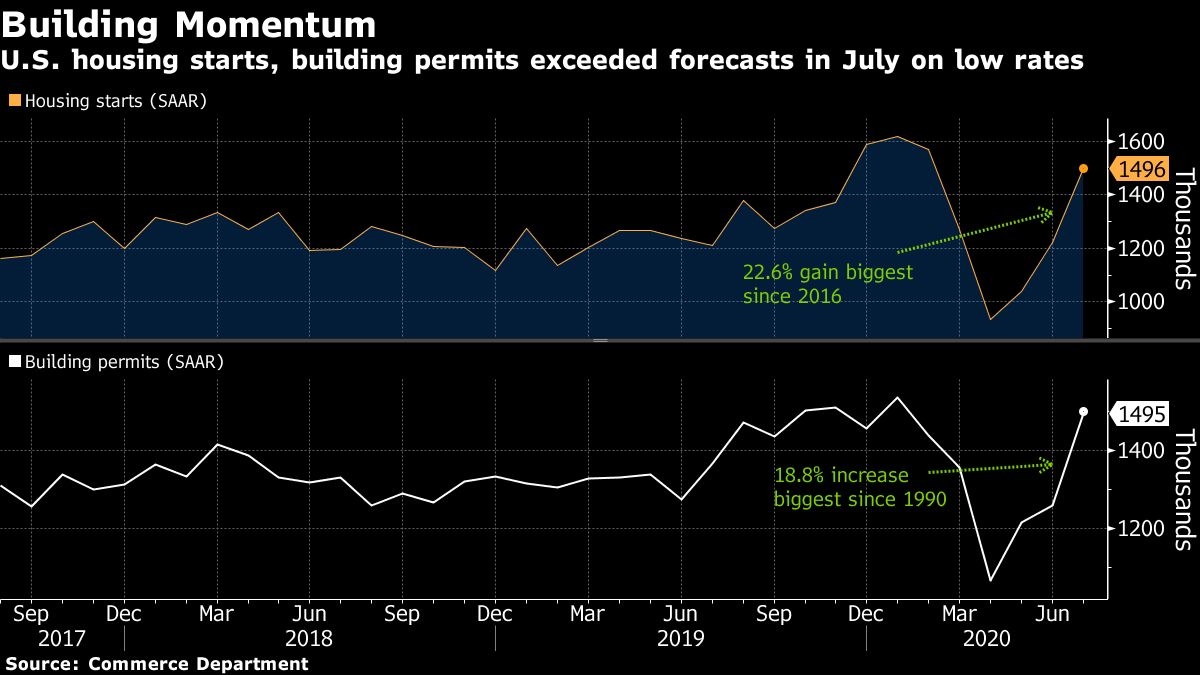 The housing market has been a bright spot for the economic recovery as low mortgage rates help make buying a home more affordable. The latest data highlight that rebound, while more recent figures suggest the trend will continue, with a measure of homebuilder sentiment jumping in August to match the highest on record.

“Record low mortgage rates and demand from families looking for more space is fueling the market and is more than offsetting the downward influence of labor market turmoil,” Joshua Shapiro, chief U.S. economist at Maria Fiorini Ramirez, Inc., said in a note.

Still, the housing market, as well as the broader economy, is not without its challenges. The jobless rate remains elevated and Congress has yet to pass a new stimulus package to support small businesses and the unemployed.

The government report Tuesday showed single-family starts rose to a 940,000 annualized rate, the fastest since February. Multifamily starts, a category that tends to be volatile and includes apartment buildings and condominiums, surged 58.4 per cent to a 556,000 pace. The monthly increase was the largest since January 2011.

Single-family permits increased 17 per cent to a 983,000 rate, the strongest since February. The number of residential projects authorized but not yet started also advanced, to 101,000 in July, the biggest backlog since the end of 2018.

At the same time, builders may face some headwinds in the coming months as building costs increase. Lumber prices are at the highest on record and may keep climbing given millions of tiny beetles are destroying the world’s timber supplies. The beetles have already destroyed 15 years of log supplies in British Columbia, enough trees to build 9 million single-family homes.

The government’s report showed starts rose in all four regions. In the South, new construction was the strongest since February, while starts in the Midwest improved to their best pace of the year.