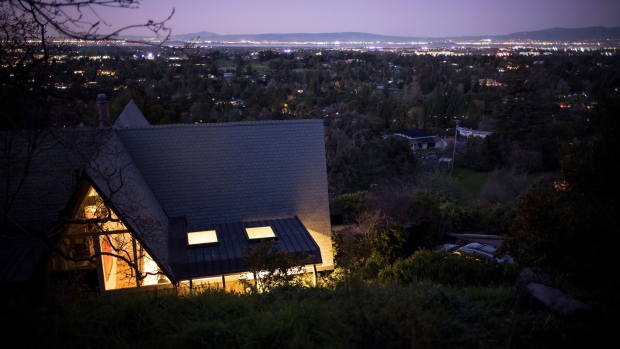 A homes stands at dusk in Los Altos Hills, California, U.S., on Monday, Feb. 10, 2020. The richest communities in the U.S. continue to get richer. This year, in order to make the top 100, a neighborhood needed an average household income of $220,000 -- up from $209,000 last year. Photographer: David Paul Morris/Bloomberg , Bloomberg

(Bloomberg) -- The U.S. housing market is set for its strongest spring since before the financial crisis as coronavirus sends mortgage rates lower amid the global rush for safe assets.

The Treasury yields that guide mortgage rates are sliding with panic over the outbreak spreading. The average for a 30-year fixed loan slipped to 3.45%, matching the rate four weeks ago, when it reached the lowest level since July 2016, according to data released Thursday by Freddie Mac.

The extra buying power will fuel purchases in the coming months and give builders an incentive to start work on new houses -- both at rates not seen since the heady days that preceded the crash, said Mark Zandi, chief economist for Moody’s Analytics. But there’s an important caveat.

“It will be a rip-roaring market,” Zandi said. “The only thing, obviously: If the virus becomes a pandemic and significantly destroys the global economy and the U.S. economy, it doesn’t matter how low rates can go.”

Eight years into the recovery, the housing market is on a tear, thanks to cheap mortgages and one of the warmest Januaries in history, which encouraged buyers to shop early. New-home sales jumped to the fastest pace since 2007 and purchases of previously owned homes are up 10% from a year earlier. Price gains are accelerating after trailing off last year.

The latest drop in rates will only increase that momentum. But how long it lasts is unpredictable. If the outbreak is contained quickly, loan costs will climb and may chill home purchases, according to Tendayi Kapfidze, chief economist at LendingTree in New York.

On the other hand, a significant spread would drive rates down further -- but in that case, don’t expect a boom. It’s possible lenders would have trouble processing applications because their employees won’t be able to get into the office, and Americans won’t be in a buying mood, he said.

“If people are basically taking actions to reduce their chances of contracting the virus, that means they’re avoiding non-essential activity,” Kapfidze said. “Then you get a decrease in traffic of people out there looking at houses.”

For now, lower rates are drawing buyers who are more sensitive to mortgage costs than they have been in the past. That’s because incomes haven’t kept up with prices, which have climbed steadily since 2012. A spike in rates in late 2018 was particularly damaging to markets like like Seattle and Northern California, where the affordability crisis is most intense.

Now, even those markets are springing back to life. The most pressing problem for buyers, who face a scarce supply of available homes, is finding something they can afford.

The number of available homes nationwide tumbled 11% in January from a year earlier, the biggest decline since 2013, data from the brokerage Redfin show. The most competitive markets were Oakland, San Francisco and San Jose, where more than 40% of homes sold above their listed prices.

Redfin agent Kalena Masching’s clients wanted to live in the heart of Silicon Valley, but by the time they were ready to make an offer on a house, prices had climbed so high that they had to expand their search. The couple eventually found a place in San Mateo, about 30 miles north of San Jose.

And they fought for it, beating out seven other bidders. They agreed to pay $1.4 million, about $200,000 more than the seller sought, and went into contract two weeks ago.

“The mortgage rate definitely helped them,” Masching said. “This is the top of their budget, so had the interest rates gone up at all, they wouldn’t have been able to afford it.”

To contact the reporters on this story: Prashant Gopal in Boston at pgopal2@bloomberg.net;Nic Querolo in New York at jquerolo1@bloomberg.net

To contact the editors responsible for this story: Craig Giammona at cgiammona@bloomberg.net, Christine Maurus